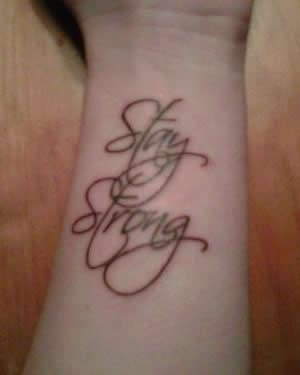 By now we all know that the singer/actress Demi Lovato spent a few months in rehab receiving treatment for “emotional and physical issues,” which included bulimia and cutting. Since checking out of rehab in early 2011, Demi has devoted her time and energy to spreading the message that nobody is perfect and happiness is all that matters. As more and more fans of Demi Lovato grab hold of her positive message and pass it around, more and more pieces of body art inspired by the singer’s tattoos are cropping up around the world. From “stay strong” to “love is louder,” Demi Lovato-inspired ink is encouraging troubled teens to find a healthy outlet for the pressure they experience on a daily basis.

When Demi Lovato checked herself into rehab in November 2010, she probably had no idea her move would spark a revolution among her fans and those struggling to overcome obstacles of their own. Since she finished treatment, tattoos inspired by the superstar have shown up on wrists, arms, and other body parts, carrying the message that Demi herself supports: “There’s a ton of pressure out there to meet impossible standards. And many of us feel like we have to be everything to everyone, but it doesn’t have to be that way.” While not all of Demi Lovato’s tattoos were inspired by this message, the tats she has inked on her wrists and ribcage are certainly proof that even celebrities struggle with self-image issues. 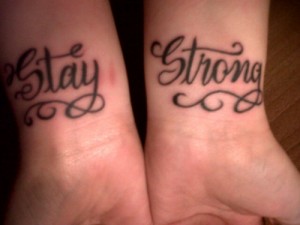 In March 2011, Demi Lovato got the words “Stay” and “Strong” and a tiny heart inked on her wrists as a reminder to herself and as a tribute to her fans and their support. The placement of the singer’s tattoos is particularly important since one of the things she struggled with growing up was self-harming, and the tattoos cover up scars she inflicted on herself during that difficult time. In response, devoted fans got their own “stay strong” messages similar to Demi’s tattoos inked on their wrists, and others simply got tattoos of the small heart that the singer dots her i’s with. It’s not surprising that fans have inked Demi-inspired tattoos on their bodies; the young star has clearly acquired a dedicated collection of fans inspired by her message. 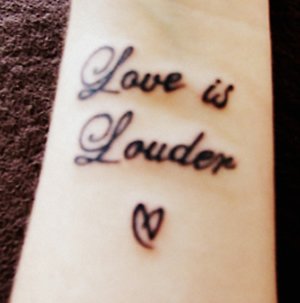 In an effort to use her own personal struggles to help other troubled teens, Demi Lovato teamed up with the Jed Foundation’s “Love is Louder” movement in 2011, spreading the message that “if you’re going through a dark period, remember that you’re not alone.” As Demi says in a PSA for the campaign, “You can get help and you can feel better, so join me in spreading this message by snapping a photo of yourself with the message ‘love is louder than the pressure to be perfect.’” We’re pretty sure Demi just meant “hold up a sign” or “write it on your hands with marker” like she did in the PSA, but fans took the message a step further and got it inked on their wrists. Underneath some of the Demi-inspired tattoos, you can even see scars similar to those on the singer’s wrists. Tattoos like the “love is louder” in this picture are proof that the message isn’t falling on deaf ears.

4 Responses to: Demi Lovato Inspires Fan Tattoos With Her Own