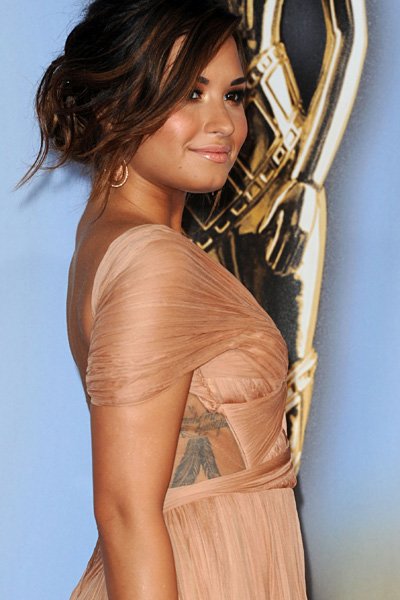 Before she was even legal, Demi Lovato hit up the tattoo parlor and got her first tat – a line from one of her favorite songs, which she had inked on her right ribcage. It wasn’t until two years later though, that pictures of Demi Lovato’s side tattoo were revealed to the public, along with the very personal meaning behind the ink. Do you know what the inspiration behind Demi’s “you make me beautiful” tattoo was?

When she was only 16, singer and actress Demi Lovato was dealing with issues that no teenager should – bulimia, addiction and self-harming. The Disney star took her issues in stride though, and chose to make her struggle public. Demi decided to have her inspiration for overcoming her inner struggle inked in a tattoo located on her side, just below her right armpit and breast. Demi Lovato’s rib tattoo reads “you make me beautiful,” and is inked over top of two large feathers, which extend down her side. The “you make me beautiful” tattoo is inked in black and white, and the text is composed of elegant script letters. Demi’s ribcage tattoo was inked at a time when the she was still struggling with her own demons, before she sought treatment for her physical and emotional issues in rehab. In fact, many of Demi Lovato’s tattoos cover the scars from the wounds she inflicted on herself over the years.

Unlike many celebrities, Demi has no problem opening up about her tattoos and the inspiration behind even the most personal of them. When pictures of her ribcage tattoo emerged back in June 2010, the rising star explained: “it says ‘you make me beautiful’ from Bethany Dillon’s song ‘Beautiful.’ That song changed my life.” The lyrics to Bethany Dillon’s inspirational song read:
I was so unique
Now I feel skin deep
I count on the make-up to cover it all
Crying myself to sleep ’cause I cannot keep their attention 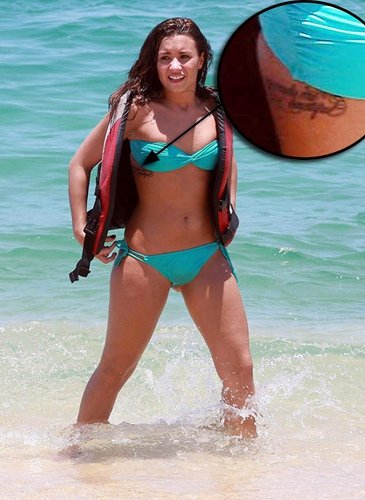 I thought I could be strong
But it’s killing me
Does someone hear my cry?
I’m dying for new life
You make me beautiful
You make me stand in awe
You step inside my heart, and I am amazed
I love to hear you say
Who I am is quite enough
You make me worthy of love and beautiful

It’s obvious that this song is meant as a cry for help from someone dealing with very personal and very serious problems. As Demi says, “It’s one of my favorite songs ever and I got [the tattoo] because I was dealing with self-image issues.” Revealed two months before her 18th birthday, Demi Lovato’s side tattoo let the world in on the young singer’s struggles with bulimia and self-harming. “The words were so encouraging and lifted me through a really dark time in my life. It’s kind of a Christian tattoo, so for me it’s religious, but it could be for anybody.” Although Demi’s rib tattoo was initially revealed in June 2010, it wasn’t until September 2011 that Demi showed off the feathers that she had added to accompany the “you make me beautiful” text. Because the singer’s side tattoo is inked in such a discreet location, it seems that the meaning of the tat is very personal and is intended as a reminder to herself. 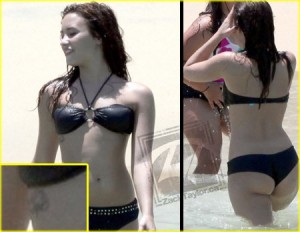 Demi was bullied as a child and began struggling with her weight as early as age eight. “I think I was born with an eating disorder, because I’ve never had a relationship with food that was normal,” Demi confides. “I started overeating when I was about eight; I was a binge eater,” Demi says. “I would bake a whole plate of cookies and eat them all. Then when I turned 12, I was bullied in school and they called me fat.” Overeating turned into bulimia and then Demi also began cutting herself at age 12. “It was my way of dealing with the stress and then I often resorted to it when I was feeling overworked.” In an attempt to get her addictive behavior under control, Demi Lovato checked into rehab in 2010 and was determined to change her life. Although the singer admits that she will struggle with her addictions for the rest of her life, she hopes that she can be a role model for young girls, helping them feel more confident and improving their self-esteem and self-image. And with her “you make me beautiful” tattoo, Demi is telling the world that, despite her struggles, she made it. “I’ve been through it,” she said, “and I came out a stronger person.”

8 Responses to: Demi Lovato’s “You Make Me Beautiful” and Feathers Rib Tattoo