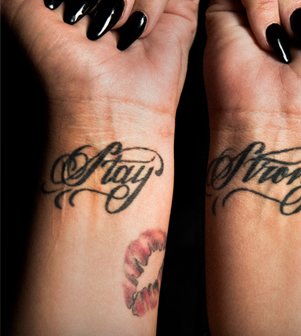 Demi Lovato better stop going to Warped Tour or she is going to be covered in tattoos! A self-professed impulsive tattoo lover, the singer and actress has gotten not one, but two tattoos inked on her body in the back of a tour bus. The second time, Demi got a tattoo of a pair of red lips, which matches tats her three best friends got at the same time. Most people know that Demi Lovato’s lips tattoo features the pout of friend Ivey Ensley, but few people know what else the kiss mark symbolizes. Read more to find out the little-known double meaning behind Demi’s wrist tattoo!

During another Warped Tour tattoo session, Demi Lovato got a tattoo of her friend Ivey Ensley’s lips inked on her wrist. The singer’s tattoo was inked in July 2011 as a matching tattoo with friends Ivey, Hanna Beth Merjos and Lauren Pietra. The matchy tattoo features a pair of red lips and is inked smack dab on the inside of Demi’s left wrist, right below the “Stay” portion of her “Stay Strong” tattoo. Both Ivey and Hanna Beth had the kiss mark inked on their collarbones. “I got a kiss mark; it’s my friend Ivey’s lips,” says Demi about her lips tattoo. “It was also at Warped Tour, on a tour bus…another one, different year,” Demi laughs. The lips tattoos inked on Demi and her friends were reportedly done by tattoo artist Ashley McMullen in the back of a tour bus at the 2011 Warped Tour.

While many of Demi Lovato’s tattoos have a deep, personal meaning for the 19-year-old, the lips tattoo she got on her wrist was just for fun. “I got like a kiss mark, and it’s just like a friendship tattoo and also it kinda reminds me not to take myself too seriously,” explained Demi. “I got like a fun tattoo rather than all these other ones that are serious.” Although the placement of Demi’s lips tattoo may seem random at first, that and her “stay strong” tattoo actually cover up scars from wounds that she inflicted on herself during years of cutting. “It was very symbolic for me to be able to cover that up and also replace it with something else that’s permanent so I’ll never be able to forget the support that I had when I went in [to treatment],” said Demi of her wrist tats.

What You Don’t Know about Demi Lovato’s Lips Tat

Even though Demi says her lips tattoo was just for fun, the kiss mark that Demi and her friends got inked on their bodies is actually the logo for a website that friend Hanna Beth developed. The project, called “Sober is Sexy,” sells “drug-free” clothing and accessories, donating proceeds to different charities in support of men and women trying to overcome drug abuse. It’s nice to know that Demi’s friends were willing to permanently ink that kind of message on their bodies, whether it was in support of Demi or themselves. And it’s no wonder that Hanna Beth went along in getting a tattoo, since her former boyfriend is Trace Cyrus…Miley Cyrus’ extremely tattooed brother. So, in getting her lips tat, Demi Lovato may not only have been marking her friendship, but she may also be discreetly supporting sobriety. Good for her!