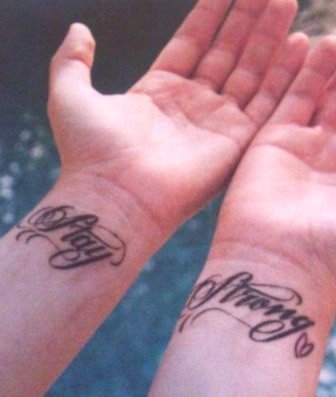 After spending three months in a treatment facility fighting her addictive behaviors, Demi Lovato decided to get the words “Stay” and “Strong” inked on her wrists, along with a tiny heart. The mantra served as a supportive measure from Demi’s fans during treatment and helped her get through her difficult experience in rehab. There is a much deeper reason for the placement of Demi’s stay strong tattoo on her wrists though. Read on to find out more about the inspirational singer’s wrist tattoos and their meaning.

Demi Lovato’s most well-known tattoo is probably the stay strong tat she got inked on her wrists in March 2011. Demi got her “Stay Strong” tattoo after spending nearly three months in rehab seeking treatment for bulimia and cutting, issues that the singer had struggled with for years prior. On her left wrist is the word “Stay” in a cursive font, and on her right wrist is the word “Strong” with a heart that Demi says she got “in honor of my fans and their support.” The mantra “Stay Strong” is so important to Demi that it also inspired the title of her moving MTV documentary by the same name. And since the saying helped her through so much, Demi hopes to pass that support on to other girls in similar situations. “Feeling comfortable in your clothes is something I deal with to this day. I wish I had somebody to look up to when I was younger to stand up and say, ‘Hey, I have fat days.’ So I want to be able to start a foundation or something that’s for girls feeling confident, to empower them.”

Demi Lovato’s stay strong tattoo made its first debut when the star was spotted flying out of LAX with her family in March 2011. “I got ‘Stay’ and ‘Strong’ on my wrists, and these actually were really meaningful to me,” Demi said. “My fans constantly said it the entire time I was in treatment.” That’s not the only one of Demi Lovato’s tattoos that was inked as a tribute though. “I have a signature heart that I dot my i’s with. So my fans would draw it on their wrists every day until I came out of treatment.” Her fans’ attempts to reach out to the struggling star translated into a wrist tattoo for Demi. “I thought ‘What better way to thank them?’ That’s a connection I have with my fans I don’t see with many other people. And it’s really cool that I have that; it’s really special.” 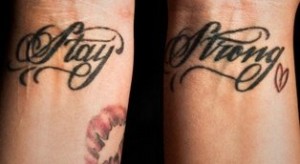 Demi’s wrist tattoo reminds her to think positively; she says, “The message is for me. It says ‘Stay Strong.’ So every day no matter if I’m putting on my shoes or putting on my makeup, I see it every day, to stay strong.” The singer’s stay strong tat doesn’t only serve as a textual reminder to herself though. The wrist tattoos actually cover up scars Demi has from wounds she inflicted on herself throughout the years she spent cutting. So Demi Lovato’s wrist tattoos are a very real reminder of what she has been through and serve as a symbol of the obstacles she has overcome in her life.

“It was very symbolic for me to be able to cover that up and also replace it with something else that’s permanent so that I’ll never be able to forget the support that I had when I went in [to treatment].”

Demi Lovato entered a treatment facility after abruptly leaving the Jonas Brothers tour in South America in November 2010 for “emotional and physical issues” that made it necessary for her “to get her life in order.” In a video message to her fans, Demi explained:

The journey that I went through and the support of my fans was so meaningful to me that I wanted to thank my fans in a way that I know can never be forgotten. So I went ahead and I got a little heart tattoo on my wrist. Together they say “Stay Strong” but this one has a heart, which is something that my fans actually were drawing on their wrists while I was still in treatment, and some people even got tattoos of it. So I wanted to show you guys that I will never forget the support that you guys gave me. And I will look at it every day and remember you guys and be completely thankful for you.