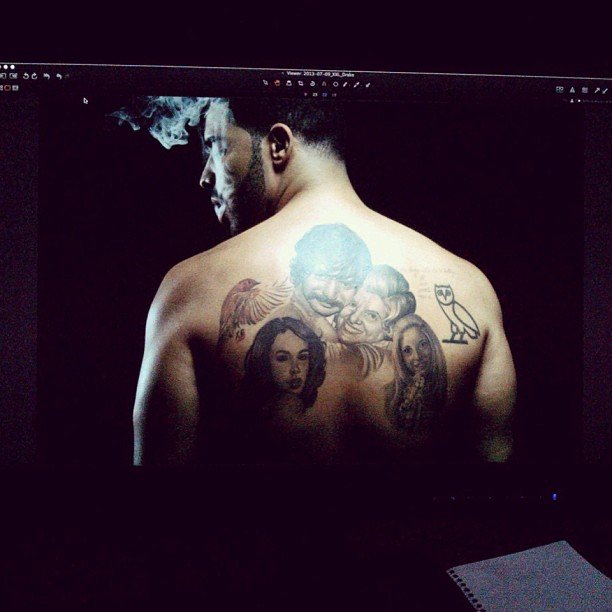 A new picture of Drake has surfaced online, and the image shows the mysterious tattoo the singer had inked on his back but has been keeping a secret…until now! Back in January, when Drake debuted the huge portrait of his uncle and grandmother on the upper part of his back, the rest of the tats on the pop star’s back were blurred out for some reason, including a new tat that we’d never seen before. The secret tattoo appeared to be a picture of someone’s face and was located between Drake’s family portrait tattoo and the OVO owl tat inked on his right shoulder blade. Now we know that Drake’s mysterious back tattoo is actually a portrait of a blonde woman who appears to be holding a microphone, so the only question is – who the heck is this woman?!

Identity of Woman in Back Tat Still a Mystery

After inking the huge “416” tattoo on his right side in August 2012, Drake was pretty quiet on the tattoo front until he revealed the giant family portrait tat in January…or so we thought. Apparently, somewhere in there, Drake secretly hit up a tattoo parlor and got a tattoo similar to the portrait of Aaliyah the singer has inked on his back, although we’re completely stumped when it comes to guessing the identity of the mysterious woman immortalized in the piece. The recently-revealed portrait tat is inked in black and white and is located to the right of the tat featuring the pop star’s uncle and grandmother – a mirror image of Drake’s Aaliyah portrait tattoo on the left side. Like all of Drake’s tattoos, the tat of the blonde woman is intricately detailed and very well done.

Do You Know Who That is in Drake’s Back Tattoo?

When adding the image of his uncle and grandmother to his tattoo collection, Drake commissioned California tattoo artist Nikko Hurtado, who posted the following message on his Twitter feed after completing the family portrait tat: “Rad experienced with @Drake he sat like a champ,” later adding, “Late night session @Drake thanks dude it was an honor.” Since Drake’s back tattoo of the blonde woman is just as well done as the family portrait tat and Aaliyah tattoo, it’s possible that Hurtado was responsible for all three of Drake’s back tattoos. So, do you know who the mysterious woman is in Drake’s back tattoo? Let us know in the comments section below!

One Response to: Who’s That on Your Back?? Drake Finally Reveals Mysterious Portrait Back Tattoo