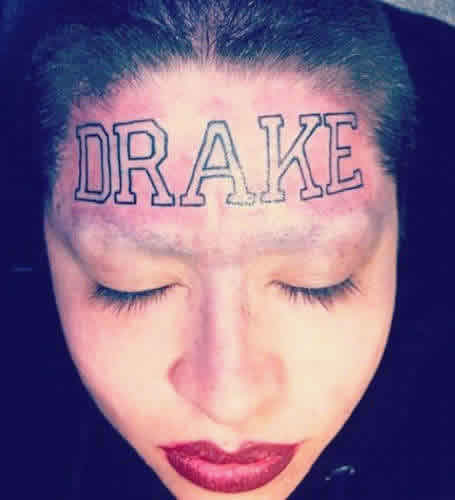 There’s no getting away from the crazy tattoo that the now-famous Drake mega-fan got inked on her forehead in 2011. Just Google “Drake tattoo” and there it is, staring you right in the face. So, if we can’t get away from it, we may as well talk about it. To be clear, we have no problem with tattoo tributes to pop stars. In fact, we think some of the tats out there inspired by Lady Gaga, Rihanna and Demi Lovato are pretty darn cool. This intense Drake forehead tat, however, definitely pushes the limits of appropriate fan tattoos. Check it out.

The Man Behind the Drake Forehead Tat

This die-hard Drake fan hit up a tattoo shop in L.A. and asked for a Drake tattoo. On her forehead. And she went through with it. The Drake tattoo is inked in capital letters, outlined in black ink, in the middle of this woman’s forehead, just above her (shaved) eyebrows and reaching almost to her hairline. The man responsible for the Drake tattoo is Kevin Campbell, who said his policy is to ask customers three times whether or not they are sure about getting a tattoo like this. Then, apparently, he can ink any crappy tattoo he wants and his conscience is clear. “Yeah, she was really psyched about it. She had the sh—y font all picked out on her iPhone ready to go and was pretty adamant about putting it on her forehead.”

“Tat My Name on You Girl”

There’s only one logical explanation for this woman’s decision to get the name “DRAKE” inked on her forehead…Drake told her to do it. It’s true; in his “Free Spirit” track featuring Rick Ross, Drake raps, “Tat my name on you girl so I know it’s real / I know it hurts, but I ain’t tryna hear it / ‘Cause when I’m not around, I’ll still be there in spirit / You’ll be mine, yea, I’ll still be yours / Tat my f—ing name on you, let em know you love the boy.” It’s not that surprising really, that a die-hard Drake fan took his words to heart and got his name tattooed on her forehead.

Drake is no stranger to tribute tattoos inspired by music idols – he has two tats inked in honor of the late Aaliyah, who he says he was “truly in love with” before her tragic death in 2001. But what does Drake think about the woman who got the impressive fan tattoo inspired by him? “I want to meet her and understand what happened. That’s cool though, I feel you 100%, that to me is absolutely incredible.” For the tattoo artist, however, Drake had this to say: “The guy who tatted is a f—ing a–hole though, I will tell you that. I don’t f— with that guy. F— you to that tat artist by the way. And you should lose your job and should never do tattoos again and I don’t f— with you. And if I ever see you, I’m a f— you up.” Well, there you have it, folks! Drake’s pissed.

One Response to: Die-Hard Drake Fan Gets Insane Forehead Tattoo