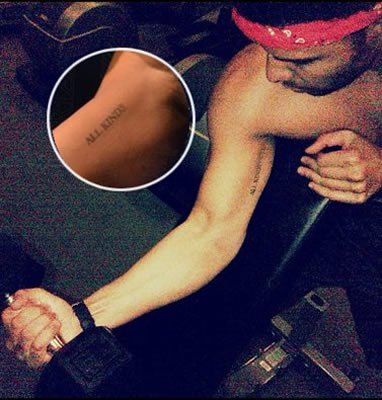 As a shout-out to his friends, Drake got a small arm tattoo in February 2012 that reads simply, “All Kinds” in capital letters. Drake’s “All Kinds” tattoo is inked on the inside of his right bicep, and, according to Drake, is a phrase the he and his friends say often. While some of Drake’s friends probably appreciate the tribute, we’re pretty sure the singer’s mentor, Lil Wayne, isn’t thrilled about the ink. Apparently, before getting his first tattoo, Lil Wayne tried to talk Drake out of getting any tats inked on his body at all, ever, which is surprising considering Weezy barely has any un-inked space left on his body. In an interview with MTV in 2010, Drake recalled Lil Wayne’s reaction to his desire to get a tattoo: “Whatever, man, whatever you do, do not get no tattoos never in your life. They gonna think you got it because you came around me.” When Drake visited Weezy in prison that year, the rapper echoed his concerns, saying, “Don’t change yourself, please. You got it. Don’t mess it up. Just be you. Sing! Rap! Be you. Don’t stop smiling.”

Despite the fact that Lil Wayne warned Drake not to go out and cover himself with tattoos like he did, Drake has slowly been adding to his tattoo collection over the past year or so. As Drake says during a 2012 interview, when asked why he opted for tats despite Weezy’s warning, “What he didn’t want me to do was go model myself after him…He was just always urging me to be my own person. Even the way I get my tattoos is way different than Wayne. I don’t like big tattoos…I just get little things, little accents that I carry with me…I got a saying that I’ve said with my friends (“all kinds”) for a long time.” It seems like that saying may have inspired more than just an arm tattoo though, since “All Kinds” is also the title of a track featuring Justin Timberlake that was supposed to be included on Drake’s Take Care album, but apparently didn’t make the cut. One of the first photos of Drake’s arm tattoo was snapped during the New Orleans stop of the singer’s Club Paradise Tour in early 2012.

One Response to: Drake’s “All Kinds” Arm Tattoo