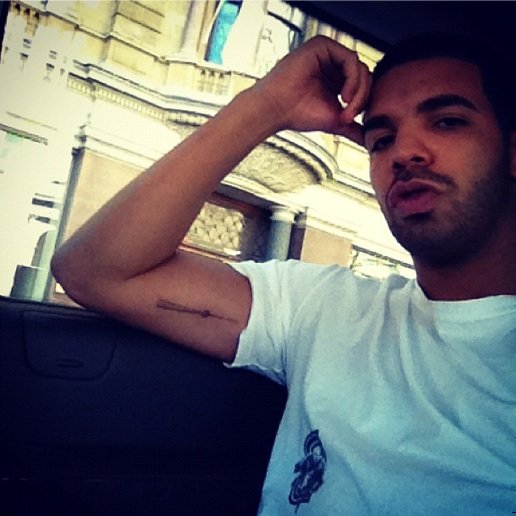 **Update: In 2014, Drake covered up the CN Tower tattoo on his bicep with a large tattoo of an eye, and added a new and improved CN Tower tattoo to the back of his upper left arm!

There’s no doubt that Drake loves his hometown – Toronto, Canada – and the distinctive tattoo inked on his left arm proves it. Drake’s tattoo on the inside of his left bicep features a miniature version of Canada’s CN Tower, a communications and observation tower located in downtown Toronto, and considered an important Canadian symbol. Drake revealed his arm tattoo in an Instagram photo posted in March 2012, which he accompanied with the caption “Toronto With Me Always.” Since he first unveiled the iconic arm tat, Drake has made an effort to show off the Canadian ink every opportunity he can, representing his hometown and his newfound love for ink at the same time. Toronto’s CN Tower was named one of the modern Seven Wonders of the World in 1995, making it a truly fitting subject for Drake’s Canada-inspired arm tattoo. Don’t be fooled by the Instagram pic of Drake’s tat that makes it look like the tower is inked on his right arm though. Drake’s right arm is where his “All Kinds” tat is inked; the CN Tower is actually on his left!

In the very beginning of his song “Uptown,” Drake sings, “Hardly home but always reppin’,” which refers to the fact that he rarely visits his hometown, but he still represents Toronto in many of his tracks. Although his annual OVO Fest does take place at the Molson Amphitheatre in Toronto, Drake didn’t make a single stop in Canada during his North American and European Club Paradise Tour this year, which must have burned his fans a bit. His supporters back home ought to be proud of the fact that Drake now has a permanent reminder of his city inked on his arm though – yet another way for the singer to rep Toronto without actually having to be there. Although Drake’s arm tattoo spans only about six inches, the real CN Tower in Canada stands 1,815.4 feet tall, and was touted as the tallest free-standing structure and the tallest tower in the world when it was completed in 1976. Although the CN Tower’s height has since been surpassed by the Burj Khalifa and Canton Tower, it remains the tallest free-standing structure in the Western Hemisphere, an iconic part of Toronto’s skyline, and an important symbol of Canada. It’s no wonder Drizzy wanted it inked on his bicep!

Drake Loves Him Some Toronto 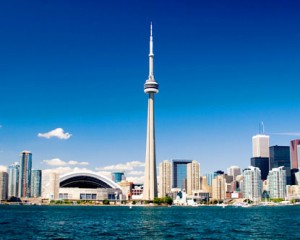 In addition to inking an image of the CN Tower on his arm, Drake always makes an effort to rep Toronto in his music, sometimes even spelling it out for the rest of us. In the track “City is Mine,” Drake sings, “Yo, the city is mine (which one?) / T-O-R-O-N-T-O.” Also, in “I Am Toronto,” he starts right off with “Toronto! / Toronto!” You get the gist of it. When it comes down to it, Toronto is more than just the place where Drake was born and grew up. He attributes his musical success to his beloved city, and believes that if it weren’t for Toronto, his music career wouldn’t have reached the caliber it is today. During his OVO Fest in 2012, Drake told his sold-out audience that, wherever in the world his music is heard, the sound that will be heard will be Toronto’s. If Drake’s CN Tower tattoo, lyrics and OVO Fest shout-outs don’t have you convinced that Drake adores his city, the newer and bigger tat Drake got on his side ought to. In yet another tribute to his hometown (and to another love of his life), Drake got a huge “416” inked on his right side in August 2012 – Toronto’s area code.