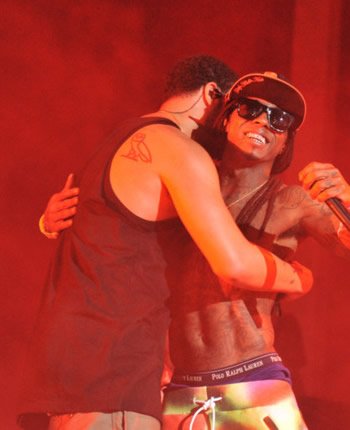 One of Drake’s earliest tattoos is inked on the upper-right part of his back and features a very simple outline of a black and white owl perched on a branch. There is an obvious reason why Drake got an owl tattoo inked on his body, and then there’s a more mysterious reason that many people have tied to a secret society much like the Illuminati. Regardless of its meaning though, Drake’s owl tattoo obviously means a lot to him, as do the rest of his tattoos. Despite the fact that his mentor, Lil Wayne, told him not to get any tattoos inked on his body, Drake has quite a few important tats scattered across his body, although his owl tattoo is probably one of his favorites. Drake first debuted his owl back tattoo at his annual OVO (October’s Very Own) Festival in Toronto, Canada in July 2011, and it has been the topic of many conversations since. Find out more about the meaning of the owl in Drake’s back tattoo, as well as the cryptic acronyms that accompany the iconic OVO owl.

To the left of Drake’s owl tattoo is a phrase written in a very light gray script, followed by some letters that appear to stand for something important to the singer. The owl tattoo quote is written in five different lines and reads, “If I die today, it’ll be a holiday / atf / ovo / ymcmb / reps up.” The beginning of the quote is a variation of a line from Lil Wayne and Rick Ross’ track called “John,” in which Weezy raps, “If I died today it’d be a holiday.” The line suggests either that Lil Wayne is such an important part of society that if he were to pass away, the country would be in such a state of mourning that the day would be named in honor of him, or it could mean that the day he dies will be the day he can finally rest. Obviously Drake considers Lil Wayne such a huge part of his life and music career that he wanted the rapper’s lyrics inked on his body. 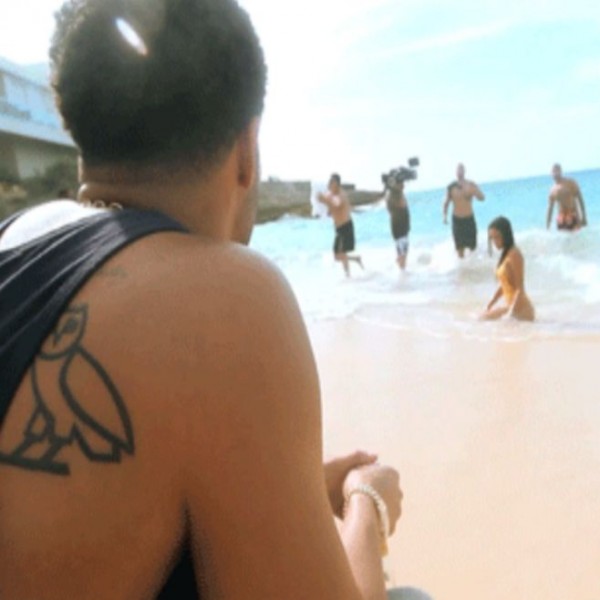 The ATF in Drake’s back tattoo stands for “All Things Fresh,” which is a symbol for the friendship forged by Drake, T-RexXx, Boi-1da, Niko, 40, Karla, Oliver, Jas Prince, Hush, CJ, Chubbs, Courtne, P. Reign, and more. “All Things Fresh” was also the name of Drake’s official fansite, which was the driving force behind Drake’s rise to stardom, and was officially shut down by founder Karla “hustleGRL” Moy in late November 2011. What started out as a simple blog blossomed into into a booming site raking in millions of visitors and eventually established the acronym “ATF” as a brand. Drake has mentioned “ATF” in many of his songs, including “Ransom” and “Thank Me Now,” in which he sings, “I rep the ATF in case you need to be reminded.” 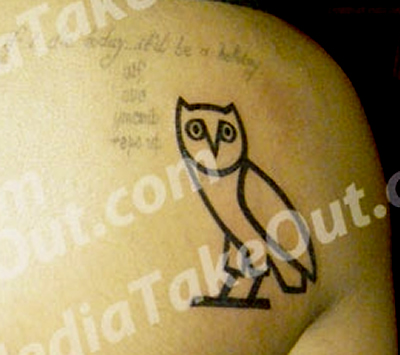 The OVO acronym in Drake’s owl tattoo stands for “October’s Very Own,” which is the name of the singer’s clothing collection and annual festival held in his hometown, Toronto, Canada. In fact, the owl in Drake’s back tattoo is also the logo for his clothing line, and is used as a symbol of the popular music festival. YMCMB, on the other hand, stands for “Young Money Cash Money Billionaires,” which is an alternate name of the Young Money rap crew, which also includes Nicki Minaj. Finally, the “reps up” in the pop star’s back tattoo represents Reps-Up Records, a record label to which Canadian hip-hop artist and friend of Drake, P. Reign, is signed. In fact, the two are such close friends that they consider themselves brothers and include shout-outs to each other in their lyrics. 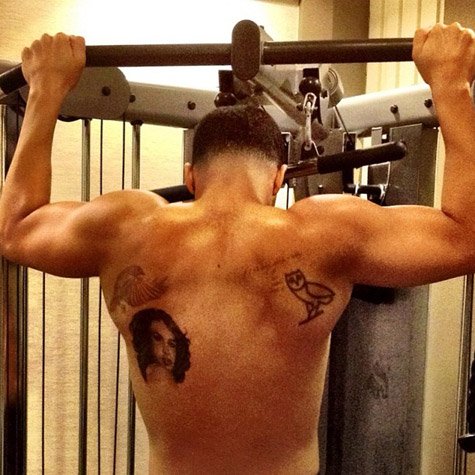 The cryptic acronyms in Drake’s back tattoo aren’t the only reason the pop star’s owl tattoo is so mysterious. According to some, the owl in the singer’s tat is a longstanding symbol of the Bohemian Grove – a men’s secret society similar to the Illuminati and the Free Masons, located outside of San Francisco. According to the Washington Post, “Every July, some of the richest and most powerful men in the world gather at a 2,700-acre campground in Monte Rio, California, for two weeks of heavy drinking, super-secret talks, druid worship (the group insists they are simply ‘revering the Redwoods’), and other rituals.” The campground is called Bohemian Grove, and in a supposed 2000 infiltration of the group by a filmmaker with a hidden camera, the members participated in a ceremony in which they “wear costumes and cremate a coffin effigy called ‘Care’ before a 40-foot owl, in deference to the surrounding Redwood trees.” Interesting that the Bohemian Grove gatherings occur in July and that’s when Drake revealed his owl back tattoo!