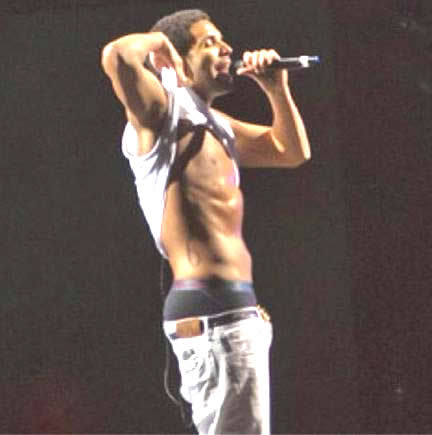 One of Drake’s largest tattoos is the “416” the Canadian singer has inked in black and white on his right ribcage, and it’s also probably the one he holds closest to his heart. Although Drake’s side tattoo clearly represents the area code of his hometown – Toronto, Canada – the numbers tat actually has a double meaning, and is also a tribute to a very special person in his life. In the midst of Drake’s efforts to finish high school and finally earn a diploma from Toronto’s Forest Hill Collegiate Institute (after dropping out at 15 to star in the Canadian TV series “Degrassi”), a black and white photo of the singer getting a new tattoo cropped up online in August 2012. There’s no doubt that Drake’s ribcage tattoo is all about some hometown love, but the ink also has something to do with Aaliyah, which is fitting considering Drake’s attachment to the late songstress has been called borderline obsessive, and he recently debuted a posthumous collaboration with Aaliyah called “Enough Said.”

If you’ve never attended Drake’s OVO Fest, seen his tattoos, heard him give an interview, or listened to any of his lyrics for that matter, you may not know that the singer is extremely proud of his Canadian upbringing. It’s true though, and Drake has some serious love for Toronto in particular, where he was born and raised, and the city has proven to be a major influence on Drake’s musical career. In an interview published in July 2012, Drake said, “When I think of myself, I think of Toronto. My music would never sound the way it does it if weren’t for Toronto.” Drake also mentions his love for Toronto in a number of his tracks, including obvious choices: “City is Mine” and “I am Toronto.” So, in honor of the city that he loves, Drake got Toronto’s area code – 416 – inked in a large tattoo on his side, to go along with the Toronto CN Tower tat he sports on his left bicep.

If you’re at all familiar with Drake’s owl tattoo and songbird tat on his back, you probably won’t be surprised to learn that the singer’s side tattoo actually has a double meaning. Although the outline of the tat shows a clear “416,” Drake chose to fill in only part of the 4 so that it looks like the number 1 on the inside. 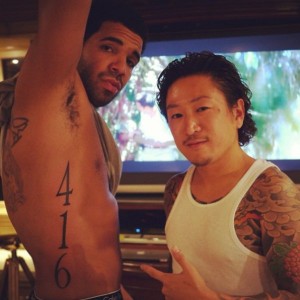 The result is the number 116, which represents the birth date (January 16) of the late singer, Aaliyah. Drake has been open about his love and admiration for Aaliyah in the past – despite the fact that the two never met before her tragic death – and he even penned an open letter to the influential singer on the ninth anniversary of her death, professing his love for her. In a 2011 interview, Drake said, “I just found comfort in all of Aaliyah’s music and her melody choices and the things that she talks about – and how she always conveyed these amazing emotions but never got too sappy.” Drake also has a portrait of Aaliyah inked on his back, and the more recent area code/Aaliyah tribute tattoo came shortly after Drake announced his plan to release a posthumous album with the late singer.

One Response to: Drake’s 416 Tattoo on His Side