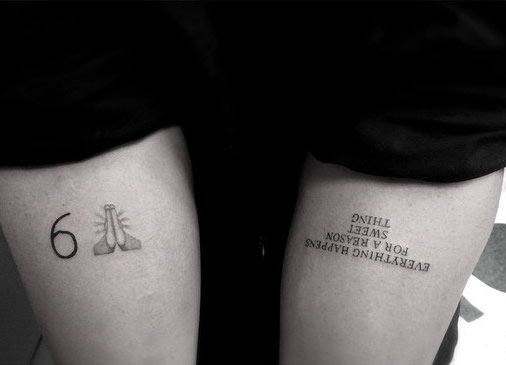 **Update: Once Drake dropped three previously unreleased songs on October 25, 2014 (the day after his 28th birthday), we figured out that the singer’s number 6 and praying hands emoji tattoos are actually a single tribute to his new track, “6 God!”

It’s been a good seven months since Drake last got a tattoo, but the singer went all in this week, adding THREE new tattoos to his forearms – the number 6, the praying hands emoji and an inspirational quote. It was Dr. Woo of Mark Mahoney’s Shamrock Social Club in Hollywood who first revealed Drake’s new tattoos on September 24, captioning the Instagram pic of the tats “@champagnepapi good times, thanks for the visit #jimjoe6 #wordsofwisdom #shamrocksocialclub.” In the photo, Drake is holding both forearms upside-down, showing off a black number 6 and the praying hands emoji on his right arm, and the quote “everything happens for a season sweet thing” on his left arm.

Take a look at Drake’s tattoos as a whole, and you’ll see that he dedicates space on his body to the people, places and things he cares about most. He’s got a large family portrait tattoo on his back, a small portrait of his father on his arm, and several tats scattered across his body that are dedicated to his best friends, people in the music biz, and his hometown of Toronto, Canada. Music obviously plays a huge role in the rapper’s life, and when we saw Drake’s new “6” tattoo on his arm, we figured it must be a tribute to his forthcoming LP Views from the 6. “The 6” in Drake’s album title is supposedly a reference to Toronto, based on its area codes 647 and 416, the latter of which Drake already has tattooed on his side. According to the hashtag in Dr. Woo’s post, Drake’s “6” tattoo is also inked in the style of street artist Jim Joe. 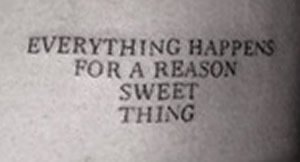 Emoji tattoos are becoming more and more popular among celebrities, and it was just earlier this year that Miley Cyrus revealed a crying cat emoji inked on the inside of her lip. So it’s not that surprising that Drake has now opted for an emoji tattoo as well, albeit a far more tasteful one, in our opinion. Drake’s emoji tattoo is inked in black and white and features a pair of hands pressed together in the universal symbol of prayer. Even though Drake doesn’t consider himself a very religious person, he said during a 2011 interview with Tim Westwood, “I always talk to the big guy upstairs every night,” so it’s likely that Drake’s tattoo is a symbol of giving thanks to God. Or, we are totally off and the tattoo is actually an emoji of two hands high-fiving…the world may never know.

Drake’s “Everything Happens for a Reason” Quote Tat

The third of Drake’s tattoos inked by Dr. Woo features a quote inked in black capital letters that reads “everything happens for a reason sweet thing.” Drake seems to prefer graphic tattoos over textual ink most of the time, but the text-based tattoos the singer does have are all tributes to his best friends, including the “All Kinds” tat on his arm and the “XO20” and “If I die today, it’ll be a holiday / atf / ovo / ymcmb / reps up” tattoos on his back. This new quote tattoo on Drake’s arm is far less cryptic than his other textual tats, but we’re still stumped as to the “sweet thing” reference in the otherwise well-known quote. Could this be a nod to Rihanna, who has been spotted with Drake quite a bit recently? Stay tuned to find out!