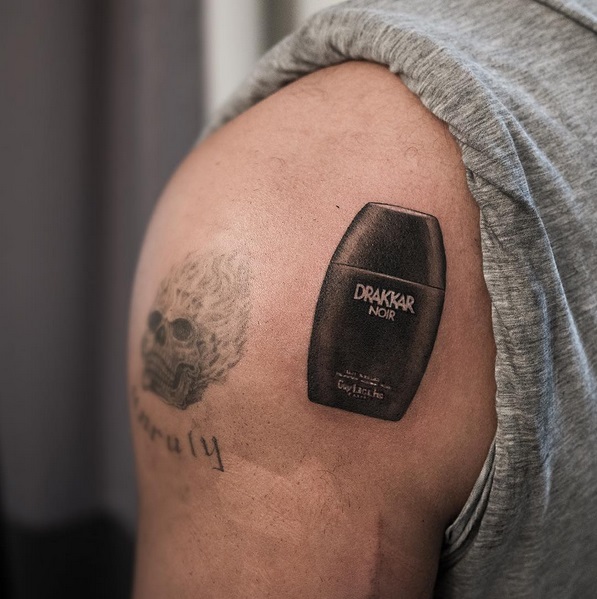 Just days after Drake’s pink flower tattoo broke the internet, largely because it seemed an obvious reference to the rapper’s highly-anticipated (and oft-delayed) More Life playlist, another new Drake tattoo has been revealed by Swedish tattoo artist Niki Norberg, and this one may be even better than the flower. In a photo posted to Norberg’s Instagram account on March 21, you can see the unmistakable flaming skull tattoo Drake had inked on his left shoulder last November, and next to it is a brand-new tattoo of a classic black Drakkar Noir cologne bottle.

On March 18, Drake finally dropped his new compilation More Life, and hours before the project debuted on OVO Sound Radio, Niki Norberg, an award-winning tattoo artist based in Gothenburg, Sweden, posted a photo of a new hibiscus and bee tattoo inked on Drake’s shoulder – an obvious tribute to the new playlist, which Drake and his team have promoted on social media using a pink flower emoji. Just days later, Norberg posted a photo of Drake’s new Drakkar Noir shoulder tattoo, and fans have speculated that the fresh ink is probably a nod to the rapper’s old Twitter handle, @drakkardnoir.

There’s a lot of new Drake stuff happening right now; the flower tattoo, the Drakkar Noir tattoo, and the new More Life project, which Drake says is “an evolution of the mixtape.” During a recent interview with DJ Semtex for OVO Sound Radio, Drake talked about the project, explaining, “The style in which it’s being put together is based off of our concept that is OVO Sound Radio. You’ll kind of hear it when you hear the project. I love the way it’s put together. It’s really put together as a seamless listen. Basically, what I asked myself was, ‘What would happen if I just did an OVO Sound Radio but every song was a new Drake song?’ That was kind of my idea for it.’”

So back to this new Drakkar Noir tattoo of Drake’s which is inked right next to the flaming skull tattoo on his left shoulder, and appears to have been done during the same tattoo session as his flower and bee ink. Whether Drake is a big fan of the French cologne, or if he just likes the fact that “Drakkar Noir” is similar to his name and makes a clever double entendre that he now holds permanent claim to, the world may never know. Or perhaps it’s a symbol of something new to come? Check back with us to find out!

One Response to: Drake’s Got ANOTHER New Shoulder Tattoo – This Time a Nod to Drakkar Noir Cologne