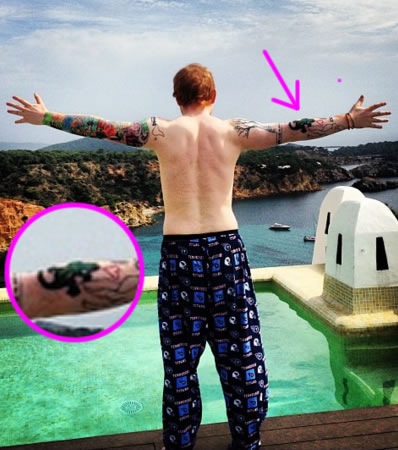 Now that Ed Sheeran’s left sleeve is finished in all its colorful glory, the pop star is reportedly starting another full-sleeve on his right arm that he says is inspired by his upcoming album, with one of the first additions being a sort of weird lizard tattoo. The lizard tattoo is inked on the outside of his right forearm and features a large green lizard that looks like it’s spitting out a red outline of a heart. Ed’s new tattoo is located just below the huge tree of life tattoo the pop star had done back in June 2013, and should give us a hint about the “Lego House” singer’s upcoming album. Perhaps he plans to “pick up the pieces” and build a lizard house??

Sheeran’s tattoo artist, Kevin Paul, is the one who spilled the beans about the work he has been doing on the already inked-up 22-year-old, saying, “He’s getting another sleeve done with inspiration from his new album. The left arm is done and we are working on the right one. He had a teddy bear a couple of weeks ago, because he was called ‘Teddy’ at school.” Paul continued: “He’s also had a rose done, and a lizard, which was to do with his new album. There’s loads we’re working on now.” Loads?? That means we have plenty more of Ed Sheeran’s tattoos to look forward to in the future!

Ed is known for covering himself in tattoos that represent important people and times in his life, such as the “RED” tattoo he got to remember collaborating with Taylor Swift on her fourth studio album, and the “Pingu” penguin tattoo he shares with best bud Harry Styles. Hoewever, his most cherished tattoo inspiration though comes from music, so we’re not surprised he is planning a full-sleeve as a tribute to his sophomore album. 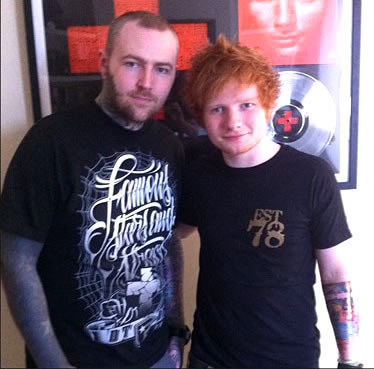 If his most recent tattoos represent tracks on his upcoming album, we would have to guess that the teddy bear tat stands for personal memories and the rose tattoo symbolizes love or romance. But what about the lizard? We have to admit, a tattoo of the heart-spitting lizard has us stumped.

Ed Sheeran’s sophomore album is set to be released on February 17, 2014, and although the singer has yet to reveal the official album title, his “=” tweet on January 13th had fans going into a frenzy over the follow-up to his debut album, which was titled simply “+”. Ed’s tattoo artist Kevin Paul has apparently already heard the album, and said recently, “It’s really good. There’s a song called ‘Tenerife,’ that is my favorite song. This year is definitely going to be his year.” With a brand-new album and a whole sleeve of tattoos just waiting to be inked, we would have to agree with Mr. Paul on that one!

One Response to: Ed Sheeran Gets Lizard Tattoo for New Album-Inspired Sleeve