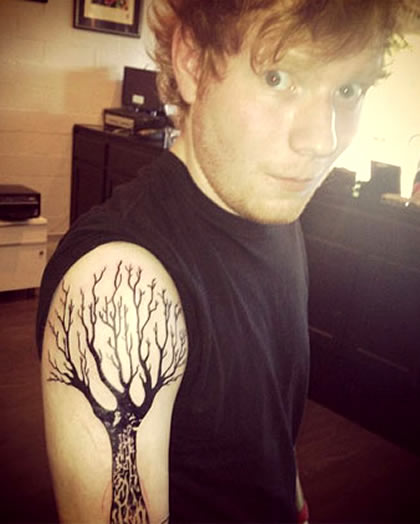 Pop star Ed Sheeran is certainly giving his One Direction buddies a run for their money when it comes to tattoos, debuting another new addition to his extensive tattoo collection in the early hours of June 21, 2013. Ed Sheeran’s new tattoo is apparently supposed to represent the singer’s family tree, but all of the branches are bare, which makes his family tree look awfully naked! Instead of a family tree, Ed Sheeran’s tattoo looks more like the Tree of Life to us, which is often inked as a symbol of immortality, harmony and unity. Whether it stands for a family tree or the Tree of Life, Ed Sheeran’s tattoo looks like it’s unfinished, so he may be adding even more artwork to his arm soon. As Harry Styles and Zayn Malik continue to up the ante with more new tattoos, we can expect the likes of Ed Sheeran and other pals of the One Direction boys to follow in their footsteps, so stay tuned!

There’s no doubt that Ed Sheeran loves getting tattoos, and he has even tried his hand at inking some tats on his buddies as well, including the tattoo-happy Harry Styles. Ever notice Harry Styles’ tattoo featuring a tiny padlock on his left wrist? Compliments of Ed Sheeran! Ed also has a penguin tattoo inspired by the British claymation series called “Pingu,” and the pop star says the piece is a “bro tat” with Harry Styles, matching the One Direction singer’s arm tattoo that says “PINGU.” This time, Ed Sheeran apparently drew inspiration from his family for his new tattoo, which is inked on the upper part of his right arm. The arm tat features a weird-looking tree with the trunk inked in black and white and leafless branches reaching up towards the singer’s shoulder.

After getting the arm tattoo inked, Ed took to Instagram to show off the artwork, including the caption: “Got a family tree I did,” which is the only way we actually knew what the arm tattoo was supposed to be. While explaining the inspiration behind some of his other tattoos, Ed Sheeran recently said, “It’s all memories of what’s happened in my career so far.” So perhaps the pop star’s new arm tattoo has something to do with his ongoing success in the music industry? Also, Ed recently moved to the United States to spend the year touring with Taylor Swift on her “Red” tour, so there’s a good chance the “family tree” tattoo is a way for the singer to remember his roots and his home, similar to the meaning behind Harry Styles’ ship tattoo – which he coincidentally got inked in the company of Taylor Swift…small world!