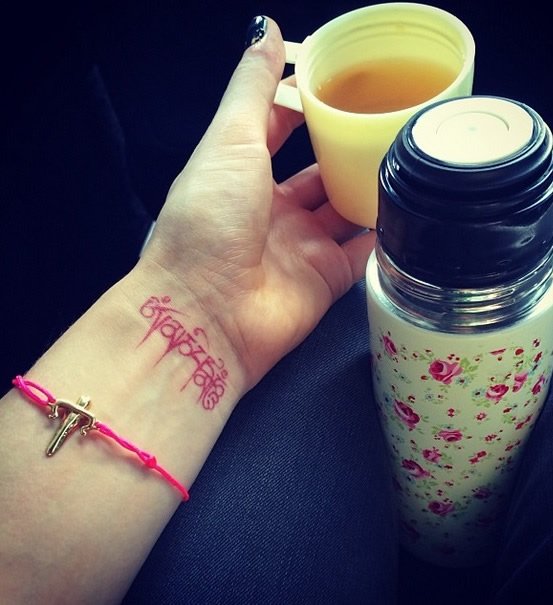 It’s obvious that British singer-songwriter Ellie Goulding is pretty unconventional, and when it comes to her tattoos, she often chooses colorful red and even discreet white ink over the traditional black, similar to the tattoo designs of fellow pop stars Rita Ora and Rihanna. On her left wrist, opposite her red triangle tattoo, Ellie Goulding rocks another red tat, but this ink has a very clear symbolic meaning, unlike the triangle, which Ellie calls “random” and “nostalgic.” According to Ellie herself, her second red wrist tat reads “Om mani padme hum,” a Tibetan mantra that translates to “jewel in the lotus.” Ellie Goulding’s tattoo was inked back in November 2013, by Dr. Woo at West Hollywood’s infamous Shamrock Social Club, a tattoo parlor also responsible for many of Harry Styles’ tattoos.

The lotus flower is wrought with symbolic meaning, and while many celebrities, like Ireland Baldwin and Katy Perry, invoke this meaning with a tattoo of a lotus flower image, others choose a more discreet representation of the same message, like Ellie’s Tibetan wrist tattoo. “Om mani padme hum” is the six-syllable Sanskrit mantra commonly associated with the four-armed Shadakshari form of Avalokiteshvara. Confused? According to Buddhist beliefs, the Avalokiteshvara, or the “Lord who looks down,” is an enlightened being who embodies the compassion of all Buddhas, and in Tibetan Buddhism is often called “Shadakshari,” which means “Lord of the Six Syllables.” Recitation of the mantra “Om mani padme hum,” along with prayer beads, is the most popular religious practice in Tibetan Buddhism.

The fact that the Tibetan mantra featured in Ellie Goulding’s tattoo has to do with a lotus flower is pretty significant. The lotus flower, which grows in muddy water and rises above the murk towards the surface to bloom in the sun, has long been a symbol of enlightenment and fortune in Buddhism, and a similar meaning applies to Ellie’s wrist tat. After dating former boyfriend Greg James for nearly two years, Ellie says the “unexpected” break-up in late 2011 totally threw her off and, naturally, inspired some of the darker themes present in her sophomore album Halcyon, a word that actually means “denoting a period of time in the past that was idyllic, happy and peaceful.” Though Ellie suffered a serious bought of depression following the heartbreaking split, she says she is slowly regaining her confidence and still subscribes to the idea that “Anything Could Happen.”

“In any relationship, you can’t predict anything,” Ellie Goulding said during a recent GQ interview about her break-up with James. “Like, I met someone else [DJ and producer Skrillex] – I could never, in a million years, have predicted that.” Sadly, Ellie and Skrillex have since called it quits, but Ellie remains positive and looks toward the future. And so the talented 27-year-old continues her rise towards the surface.