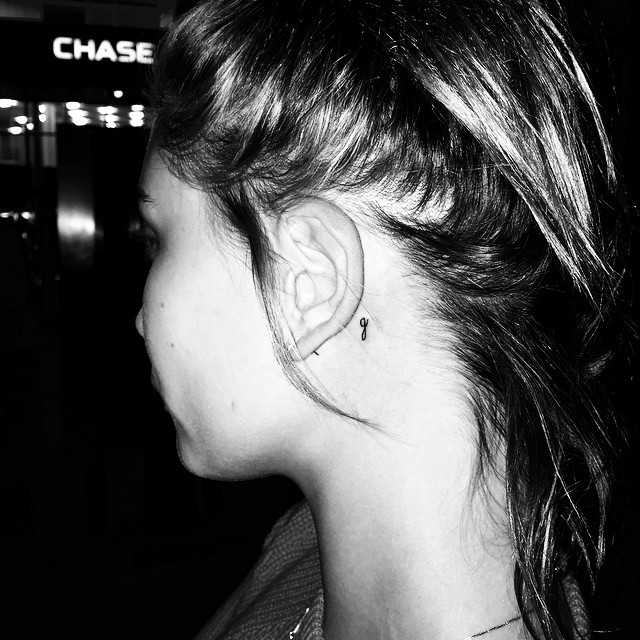 **Update: In a blog posted to her website in April 2016, Kendall Jenner explained that her white “dot” tattoo is actually a full heart meant to represent an angel, compared to the broken heart tattoo on her other middle finger, which represents her “devil side.”

During a late-night tattoo session that took place earlier this week and included pals Kendall Jenner, photographer/director Joe Termini and singer-songwriter Harry Hudson, model Hailey Baldwin got a small letter “g” inked in black behind her left ear for a very good cause. Hailey posted a photo of her new “g” tattoo on Instagram, along with the caption, “G for Georgia #georgiaonmymind 🙂 love you both @juliaveach @chad_veach.” The tattoo artist responsible for Hailey’s new tattoo, Jon Boy, also posted an Instagram photo of the ink, captioning the snap, “g for georgia #hillsongnyc #jonboytattoo.”

In case you’re wondering who the heck Georgia is, it turns out that Hailey Baldwin’s tattoo, which was inked on June 16, is a tribute to Seattle Megachurch Pastor Chad Veach’s daughter Georgia, who was born with a rare brain disorder called Lissencephaly, or “smooth brain.” Georgia’s story has touched a number of celebrities, and Pretty Little Liars actress Ashley Benson also recently got a “G” tattoo in honor of Georgia’s brave fight. Chad Veach must have been pretty impressed with Hailey’s new ink though, because he regrammed the tattoo snap, writing, “so kind, so thoughtful…we love u @haileybaldwin #G #thankful.” 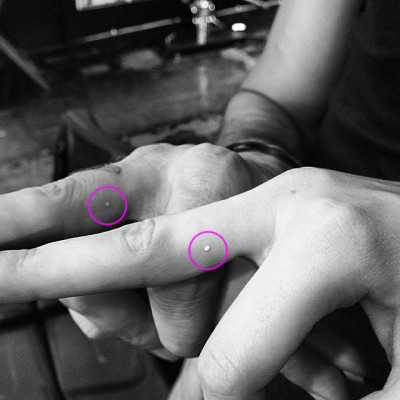 Around the same time that Hailey Baldwin revealed her “g” tattoo for Georgia, Selena Gomez debuted what looks like the exact same tattoo in the same location behind her left ear. It’s hard to tell from the photos we’ve seen so far whether Selena Gomez’s tattoo is a lower-case “g” or a capital “J,” but judging by the impact Georgia’s story has had on some of our favorite celebrities, we’re guessing Selena’s new behind-the-ear tat may also be a tribute to the pastor’s daughter. Either that, or Selena got a “g” tattoo that stands for “Gomez” or her little sister Gracie, or she opted for a capital “J” for Jesus, or possibly even Justin. 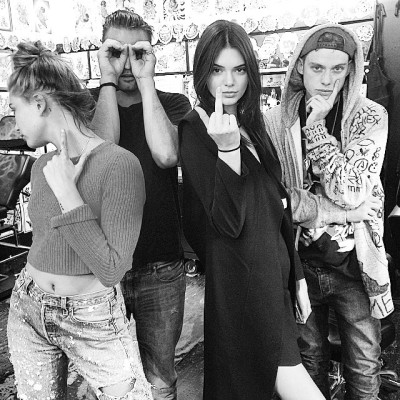 During the same tattoo session that resulted in Hailey Baldwin’s “g” tattoo, Kendall Jenner opted for the world’s smallest matching tattoo with Joe Termini – a tiny white dot they both got inked on the inside of their middle fingers. Apparently Kendall is proud of her new ink, which flies in the face of sister Kim’s strict no-tattoo policy, because in a Snapchat video shared by Hailey Baldwin, Kendall says, “It’s f—ing badass!” It may be the tiniest tattoo ever, but we are all about being rebellious, so we have to agree Kendall!