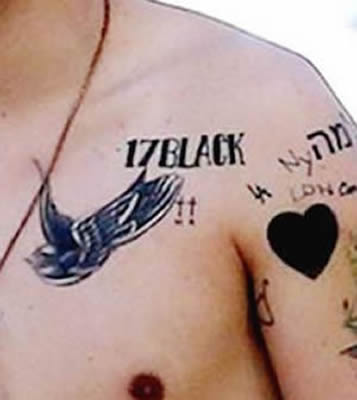 The only part of Harry Styles’ body that contains as much ink as his arm is his chest, which features quite a few pieces of permanent artwork, including the bold black tattoo that reads “17 BLACK” and a couple of tiny crosses, which are surrounded by a bit of mystery when it comes to their meaning. Harry Styles’ chest is so inked up, in fact, that the singer is reportedly considering getting a large back piece to balance himself out a bit. One large back piece? That certainly doesn’t sound like Harry Styles, whose collection of tattoos to date consists of dozens and dozens of tiny random tats. Check out a couple of them below!

You can find out quite a bit about someone by studying their tattoos, and Harry Styles’ extensive tattoo collection give us all a little peek at some of the influences in the pop star’s life. For example, Harry Styles is apparently a big fan of James Bond – a big enough fan to ink “17 BLACK,” the infamous 007’s lucky roulette bet, on his chest. Harry’s “17 BLACK” tattoo is inked on the upper part of his chest, near his left collarbone, and the ink joins several other tats inked on that part of the singer’s body, including two large sparrows on his chest and the two tiny crosses Harry has near his left armpit. Tattoo artist Kevin Paul inked the lucky tattoo on Harry’s chest on August 13, 2012, but it wasn’t until a couple weeks later that the first picture of the “17 BLACK” tattoo finally surfaced. In September 2012, the pop star’s friend Cal Aurand tweeted the first clear picture of Harry Styles’ chest tattoo.

Just below his “17 BLACK” and sparrows tattoos, Harry Styles has two tiny crosses inked next to one another with the capital letter “M” below one and “K” below the other. It is assumed that Harry Styles is Catholic, since he often sports a necklace with a crucifix on it, and his religious beliefs would definitely tie into the cross tattoos he has inked on his chest. Harry has also been spotted with a medal around his neck featuring St. Christopher, who is the patron saint of travelers in the Catholic religion. When explaining some of his other artwork – including his sparrow chest tattoo and ship arm tattoo – Harry has mentioned that he is always traveling but his heart is always at home in England. When it comes to the significance of the “M” and “K” letters inked below the crosses, the jury is still out about their meaning, but Harry is obviously a fan of tattoos related to the people he holds close to his heart (he has quite a few dedicated to his mother, sister and band mates), so it’s possible the pop star’s cross tattoos are a tribute to a beloved family member or friend.