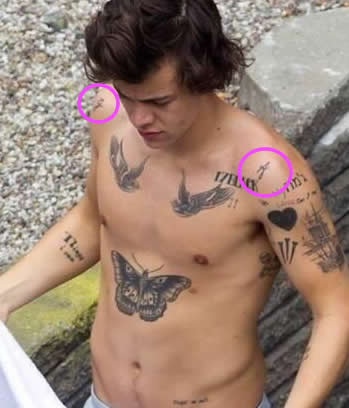 Harry Styles has proven through his many tattoos that he is a loving brother, son and friend, inking tattoos all over his body in honor of home and his loved ones, particularly family members like his mother and sister. The largest and most notable of Harry’s family-inspired tattoos is the giant English ship he got inked on his left arm back in December 2012, which the singer says reminds him that no matter how much he travels, he is always homeward bound. However, there are plenty of other tats the pop star got inked on his body as tributes to the the places he calls home and the people he loves, including the “A” and “g” tattoos Harry Styles sports on his shoulders.

Because he has so many small tats scattered across his body, most people think Harry Styles’ tattoos are just random, spur-of-the-moment pieces of body art. On the contrary, most of Harry’s tattoos have a very important meaning to the singer, particularly the “A” tattoo he sports on his left shoulder. Harry Styles’ shoulder tattoo features a capital letter “A” inked in a simple black italic font and is apparently a tribute to his beloved mother, Anne Cox. Harry Styles also has a smaller “A” tattoo for his mother inked on the inside of his left elbow, but it looks like the singer got the more prominent “A” shoulder tattoo to match the “g” tattoo he has on his other shoulder.

In the exact same spot on his right shoulder, Harry Styles has a large tattoo of the letter “g,” which presumably represents his older sister, Gemma. The “g” in the shoulder tat is lower-case, unlike Harry’s “A” tattoo on his other shoulder, which is a capital letter. Both “A” and “g” shoulder tattoos are designed in an identical black italic font and were inked sometime in early 2013, since they aren’t present in pictures of Harry’s tattoos in January 2013. Harry must be a loving little brother, because he has quite a few tattoos that are inspired by his sister, including her name in Hebrew inked on his left shoulder and a picture of a cookie called an “iced gem,” which was apparently Gemma’s nickname when she was younger. Who knew Harry Styles was such a family man?