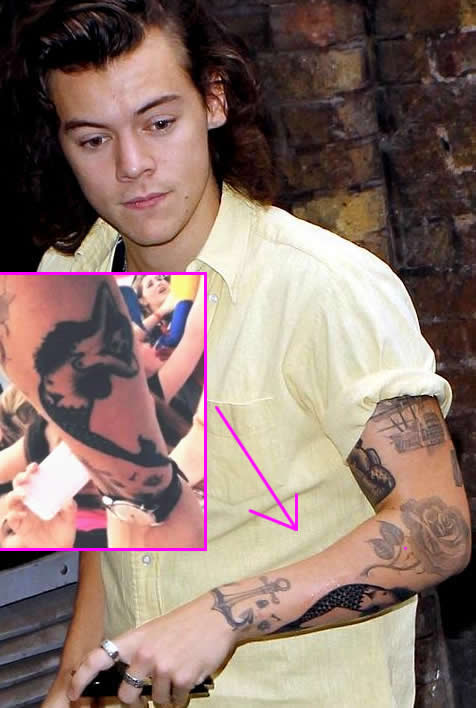 **Updated: Harry Styles finally gave us a good close-up view of his mermaid tattoo during a November 17th appearance on the Today Show, and the ink does, in fact, feature a nude mermaid with long flowing locks. During a recent interview with Hollywood Life, Harry also explained the inspiration behind his arm tattoo, saying, “I am a mermaid.” Who would have thought!

Harry Styles apparently fancies himself a bit of a trendsetter, so when he chose to make the design for his next tattoo a pretty little mermaid, he decided to up the ante and make her a somewhat racy mermaid whose fish tail stops at her thighs, rather than reaching all the way to her stomach. One Direction fans spotted Harry Styles’ tattoo of the mermaid in photos of the hunky singer out and about in London on November 13, and the Twitter-sphere has experienced a bit of a meltdown in the time since, with plenty of people wondering why Harry chose to pass over the PG-rated Ariel-type mermaid, in favor of a design that is much more naked woman than mystical sea creature.

Harry Styles’ mermaid tattoo is inked on the outside of his left forearm, between the rose tat near his elbow and the anchor tattoo on his wrist, and features a black and white image of a mer-woman with a bare stomach, lower lady parts in full view, and what appear to be the bottom parts of two wings, or just long hair cascading down her back. Word on the street is Harry’s mermaid tat was inked by renowned tattoo artist Liam Sparkes at his Shangri La shop in the United Kingdom, along with another new tattoo on Harry’s arm that reads “[something] booze” in the crude black handwriting-type font favored by Mr. Sparkes. 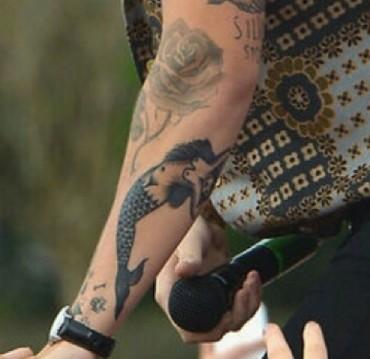 It’s been quite a while since Harry Styles has debuted a new tattoo – he showed off a large pair of ferns inked on his hips back in May – and this interesting new addition to his collection certainly has tongues wagging. Although Harry has yet to show off his racy mermaid tattoo in all its glory, Liam Sparkes inked a very similar topless mermaid tat on someone’s stomach recently, so we’ll just assume for now that Harry Styles’ tattoo looks something like that, although slightly more risqué, considering the fact that the mermaid’s crotch and lady bits are on full display in Harry’s arm tattoo. What do you all think about Harry Styles’ new mermaid tattoo…super rad or far too racy??

16 Responses to: Harry Styles Adds a New Mermaid Tattoo to His Arm, and It’s Kind of Racy!