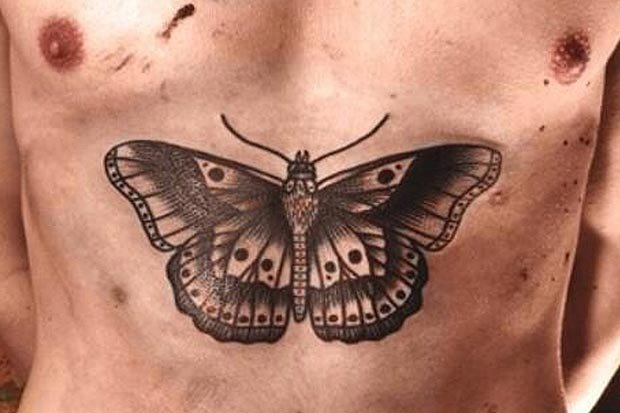 Following in the footsteps of Rihanna and Chris Brown, Harry Styles of the tattoo-loving band One Direction recently revealed a gigantic tattoo of a butterfly that he apparently had inked on his chest back in January. Not only is Harry Styles’ butterfly tattoo in a location similar to Rihanna’s goddess Isis tat and Breezy’s fighter jet tattoo, but the tats also all have wings. Hmm…interesting. Anyway, Harry Styles posted a pic of the huge butterfly tattoo on Instagram just a few days ago, although the close up shot had some claiming that the tatted-up torso could be anyone’s. Au contraire – a picture of the fresh butterfly ink was first uploaded to tattoo artist Lyam Sparkes’ Flickr page around January 22, and was taken down shortly afterward, but not before true One Direction fans identified Harry Styles’ unmistakable bod.

Harry Styles’ butterfly tattoo is inked smack dab in the center of his chest, and the first question that came to mind when we saw the large tat (besides, “why is he so dirty?”) was “what does it mean?” The butterfly tattoo is inked in black and white and, much like Rihanna’s Isis tattoo and Chris Brown’s fighter jet tat, the wings are outstretched across his upper abdomen. Although the meaning of Styles’ chest tattoo remains a bit of a mystery for now, it is notable that the ink is similar to a butterfly tattoo that Steve McQueen sports in the film Papillon. which means “butterfly” in French. When it comes to fans of Harry Styles and One Direction, they seem to have mixed reactions to the singer’s chest tattoo. One person commented on Instagram, “What the f— were you thinking,” while another wrote, “It’s orgasmic ;)”

Harry Styles Gets Personal With His Tattoos

It’s no secret that Harry Styles loves tattoos. In fact, his total tattoo count hovers somewhere near 30, and includes a ship on his left bicep, two sparrows on his chest and a solid black heart on his arm. According to tattoo artist Kevin Paul, who has done work for Styles and his One Direction pals in the past, the 19-year-old likes to make his tattoos personal. “Everyone’s different, like Zayn [Malik’s] got microphones and music stuff and, like, Harry has more personal things, like he has little things for his mom and all that kind of stuff.” Hence, the infamous (and gigantic) ship tattoo Styles got inked during his short fling with Taylor Swift. Obviously, Harry Styles isn’t afraid to go big and get personal when it comes to tattoos. So what do you think his butterfly chest tattoo means?