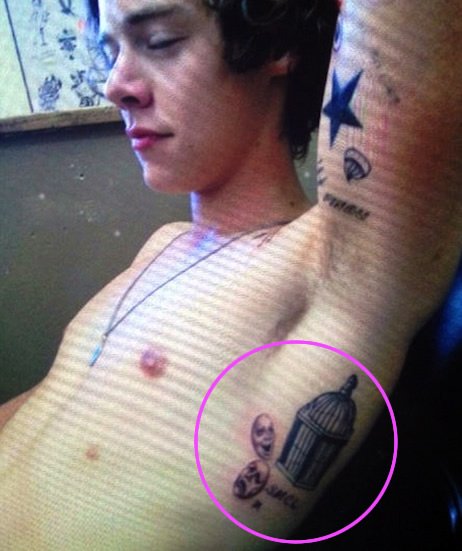 Just like on his left arm, Harry Styles has a cluster of tattoos on his left ribcage, just below his armpit, and it appears as though the pop star got them all inked during the same tattoo session, most likely at Harry’s go-to tattoo parlor, Shamrock Social Club in Los Angeles. Harry got his collection of ribcage tattoos inked on September 8, 2012, and first revealed the cluster of ink later that month in a picture he posted on Twitter. According to one of Harry’s tattoo artists, Paul Ryan, “[Harry] hasn’t got proper tattoos. They’re just scattered around. I think as he gets older he will want proper pieces and he’ll have all these little pieces.” Do you think Harry Styles will end up regretting his side tattoos?

On the left side of his torso, Harry Styles has an interesting tattoo that features an empty birdcage with the door closed. The fact that the birdcage in Harry’s side tattoo is closed seems like a pretty clear hint that the singer feels caged in or like he can’t be himself or be free. It kind of reminds us of the poem “I Know Why the Caged Bird Sings,” by Maya Angelou, which reads, “The caged bird sings / with fearful trill / of the things unknown / but longed for still / and his tune is heard / on the distant hill / for the / caged bird / sings of freedom.” Harry added the black and white birdcage tattoo to his collection in September 2012, and apparently got the artwork inked during the same session as his theatre masks and “SMCL” tats. Some people say Harry’s side tattoo is a pun for rib-cage. If it is, we think he’s taking this pun tattoo thing a little too far!

Next to his birdcage tattoo, Harry Styles sports a black and white tattoo featuring the classic drama and comedy theatre masks. Typically referred to as Greek theatre masks, the images of the masks come from the comic and tragic muses, Melpomene and Thalia, in ancient Greek drama. Although these masks were originally used by characters in Greek theatre so that the audience could easily identify their emotions, today the theatre masks are often used in tattoos for people who appreciate live theatre performance. In some cases, people opt for theatre mask tattoos as a symbol of their passionate personality, which could apply to Harry Styles for sure.

To the right of his theatre masks tattoo, Harry Styles has another tat that reads “SMCL” in capital letters, along with the letter “X” inked in black below it. The pop star presumably got the “SMCL” and “X” tattoos on the same day as the theatre masks and birdcage ink, showing off the artwork on Twitter in September 2012. Harry hasn’t yet let us in on the meaning of his ribcage tattoo, but the consensus seems to be that the piece stands for “Smile More Cry Later,” which could definitely tie into the comedy and drama theatre masks. We’re not too sure about the meaning of Harry’s “X” tattoo, but a number of other pop stars have added mysterious “X” tattoos to their bodies lately, including Miley Cyrus, Justin Bieber and Chris Brown. Some people have also speculated that “SMCL” could stand for Simon Cowell, the X-Factor judge who put One Direction together, but we’re really really hoping that’s not true. Talk about tattoo regret!