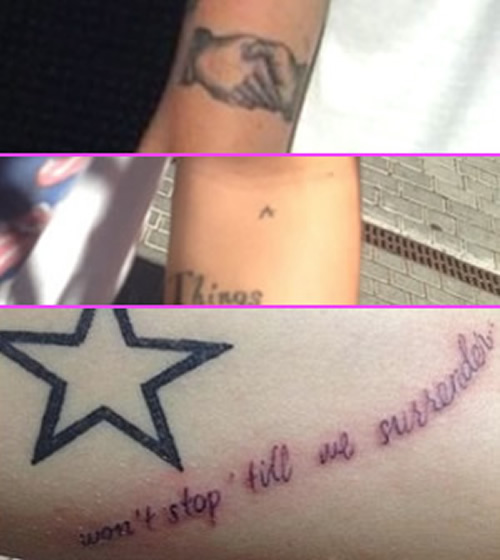 Having just turned 19 in February 2013, Harry Styles has only legally been allowed to get inked for a little over a year, but the British-born singer has already amassed an incredible 40+ tattoos, which he has scattered across various parts of his body. The majority of Harry’s tattoos are inked on his left arm though, including the handshake, letter “A” and surrender quote tattoos located on the pop star’s upper arm/bicep area. It’s interesting that nearly all of Harry Styles’ arm tattoos are inked on his left arm, because it sounds an awful lot like Lady Gaga, who promised her father that she would only get tattoos on her left side (her Iggy Pop side), keeping her right side (her Marilyn Monroe side) “normal.”

One of Harry Styles’ more recent tattoos is a large image of two hands shaking, which is inked on the outside of his left bicep. The most apparent meaning of Harry’s handshake tattoo is equality, which is obviously important to the pop star (check out the meaning of his “I can’t change” tattoo). The black and white handshake tattoo was inked on January 21, 2013, and is located below and to the right of Harry’s ship tattoo. Of course, as soon as the British singer revealed the tattoo possibly meaning equality, the Harry Styles gay rumors started up all over again. Looks like he’ll never escape those rumors no matter what tattoos he gets. 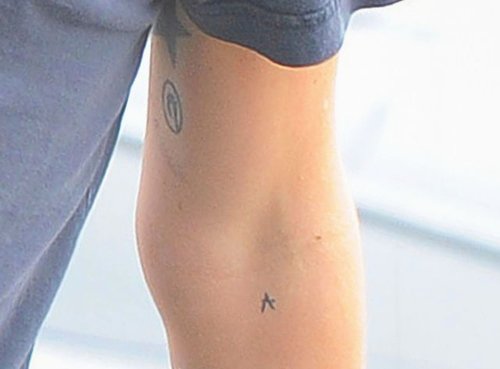 Just below Harry’s star tattoo – which was his first tat ever – he has a quote that reads “won’t stop ’till we surrender” in black italic font. Harry Styles got the surrender quote inked by Paul Nguyen on June 26, 2012, which seems like ages ago with all the ink Harry has acquired since then, and the tattoo quote has faded quite a bit over time. The general consensus regarding Harry’s tattoo meaning is that the ink is a play on the Temper Trap song “Sweet Disposition,” which actually goes like this: “We won’t stop ’til it’s over / Won’t stop to surrender.” If Harry meant to reference this song (which talks about “reckless abandon” and “a moment of love”) in his tattoo, but altered the words to say “won’t stop till we surrender,” it makes it sound like he’s saying the rumors about his love life won’t stop until he surrenders. Prior to getting the quote tattoo, which sounds awfully depressing when interpreted this way, Harry tweeted some of the lyrics to “Sweet Disposition” on April 22, 2012. 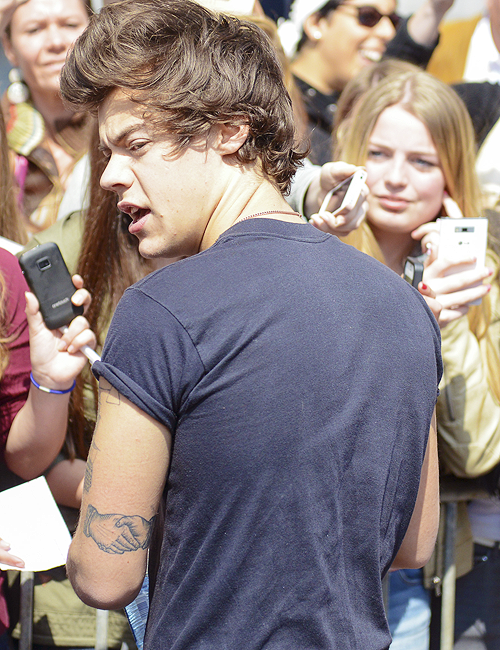 arry Styles has quite a few tattoo tributes to his family members and the people he holds close to his heart, including a tiny capital letter “A,” which the singer has inked in the crook of his left elbow. Harry’s “A” tattoo was inked in honor of his mother, Anne Cox, which whom he is very close. So close, in fact, that Harry has another larger letter “A” tattoo tribute to his mom inked on his left shoulder. Although Harry has depended on tattoo artists Freddy Negrete and Kevin Paul for most of his tattoos in the past, the pop star’s tiny “A” tattoo was actually inked by friend and fellow One Direction band mate Zayn Malik in July 2012. Great, now these tattoo-addicted pop stars are tattooing each other!