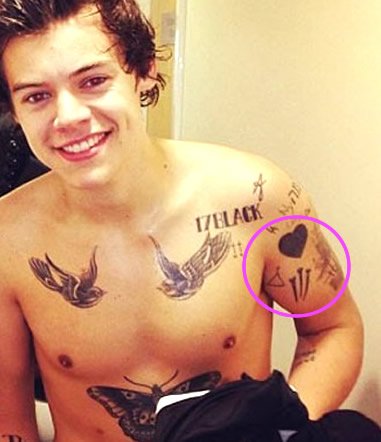 Although Harry Styles’ ship tattoo is probably the singer’s most talked-about ink because of its size and potential connection to ex-girlfriend Taylor Swift, the black heart tattoo located next to the ship also sparked quite a bit of speculation, since it was inked in the presence of Taylor that same day. And while we all try to guess the meaning behind Harry’s heart tattoo, there are two other tattoos that have gotten One Direction fans scratching their heads: the seemingly random coathanger and nails tats Harry has inked right next to the black heart on his left arm. Read on to learn more about Harry Styles’ cryptic arm tattoos and some possible reasons why he got them inked!

On the upper part of his left arm, Harry has a large heart filled in with black ink, which he added to his tattoo collection while in L.A. in December 2012. The black heart tattoo is inked to the left of Harry’s ship tattoo and matches a similar heart tat Zayn Malik, Lou Teasdale and Tom Atkin also have. While many people assumed that Harry’s ship and heart tattoos were a tribute to Taylor because of a near-identical ship tattoo that showed up in her “I Knew You Were Trouble” music video, the singer was quick to squash those rumors. As Harry said to tattoo artist Freddy Negrete of the Shamrock Social Club tattoo shop, “We’re always on the road but my heart is at home and I want a ship,” so it makes sense that the pop star would accompany the giant ship tat with a tattoo of a heart. Some people think that Harry’s heart arm tattoo could also be a pun, meaning he wears his heart on his sleeve. 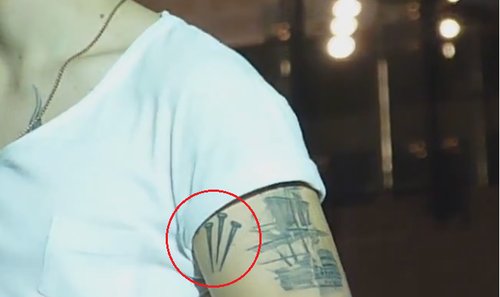 If you thought it was weird that Harry has two screws tattooed on his ankles, you might find it even weirder that the singer also has three nails inked on his arm. Potential obsession with carpentry aside, there’s no telling yet what Harry’s nails tattoo means, but we’re sure he will spill the beans sometime soon. Harry Styles’ tattoo featuring three large nails is located on the upper part of his left arm, next to his black heart, coathanger and ship artwork. Harry has stayed mum about the meaning behind his arm tattoo, but some have said that the ink could be a pun for nail gun, a good luck symbol or a religious sign. Harry’s nails tattoo was first spotted in pictures posted online in February 2013, and the same tat is probably shared by one or more of his One Direction band mates, since they apparently love getting matching tattoos.

Now this tattoo is a complete mystery. Harry Styles added a new tattoo to his massive collection on August 8, 2012, and the piece portrays a tiny black coathanger inked on his left bicep, near Harry’s black heart and nail tattoos. It seems that quite a few One Direction fans have gotten identical coathanger tattoos inked on their bodies, even though we can pretty much guarantee they have no idea what the ink means. And because nobody really knows what Harry Styles’ hanger tattoo means, there is quite a bit of speculation about the mysterious ink. Some people believe that the tat is yet another reference to Harry’s sexual preferences, meaning he is in the closet, while others claim that the tat is some kind of reference to being controlled and manipulated by the music industry.