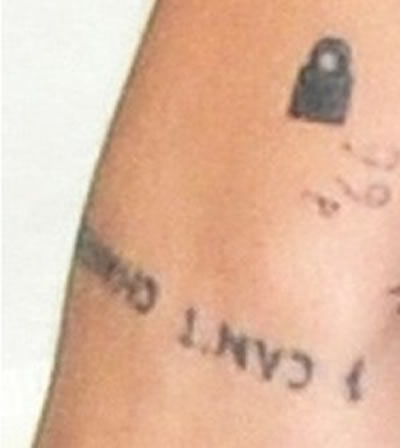 Although there are plenty of tweens out there who would positively die before they saw Harry Styles change a single thing about himself, the singer has a tattoo that hints at a possible conflict he has faced in his life and attempted to change. On his left wrist, below his padlock and key tattoos, Harry Styles has a tattoo that reads “I can’t change” in capital letters. The tat is written in black ink in a line across the outside of Harry’s wrist like a bracelet, and appears to correspond with a quotation mark tattoo that One Direction band mate Louis Tomlinson also has inked on his wrist. There have been plenty of rumors swirling around about a possible relationship between Harry and Louis, and the fact that Louis sports a pair of quotation marks on his wrist lends at least a bit of validity to those rumors. Harry and Louis also have matching key tattoos, which could be interpreted in a similar way, considering the padlock tattoo that Harry has inked on his wrist.

According to one pretty strong theory regarding the meaning of Harry Styles’ “I can’t change” tattoo, the ink refers to the 2011 Leeds Festival, where Harry and Louis watched the band Rise Against perform their song “Make it Stop,” which references kids who committed suicide after being relentlessly bullied for being gay. In the song, the band sings, “Born free, but still they hate / Born me, no I can’t change.” Apparently, Harry wore the Leeds Festival wrist band for months after the performance, but when it broke he got the “I can’t change” tattoo in its place. Harry has said that all of his tattoos have a personal meaning for him, and this wrist tattoo in particular has a somber sort of tone to it. Does Harry want to change something about himself and simply can’t, or is the ink meant as a prideful mantra saying that he is who he is? The fact that Harry used the word “can’t” instead of “won’t” makes the former seem more likely. Harry himself has shot down the rumors about the wrist tattoo, claiming that the phrase “I can’t change” is instead a reminder to always stay grounded.

One Response to: Harry Styles’ “I Can’t Change” Tattoo