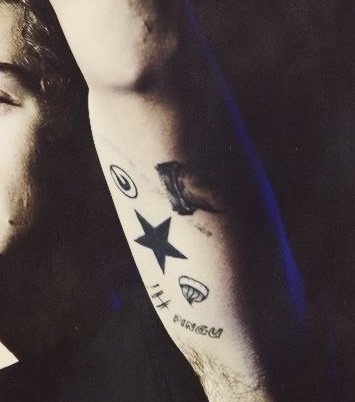 Harry Styles definitely likes to collect little clusters of tattoos, particularly on the underside of his left bicep, where he has a collection of tattoos including an iced gem cookie, the logo for the Green Bay Packers football team, a filled in black star, the word “Hi,” and the word “PINGU.” Harry has said that all of his tattoos mean something important to him, but we’re going to take a wild guess and say that some of the ink is just completely random. “Hi,” anyone? Regardless of whether they are meaningful or not though, there are definitely some pretty interesting stories behind Harry Styles’ 40+ tattoos, particularly the one that led to the pop star getting his Green Bay Packers tattoo on his arm. Read on to learn more about Harry’s arm tattoos and their meanings!

Wondering why Harry Styles has a cookie tattoo on the inside of his arm? It’s a tribute to his sister, of course! Apparently, Harry’s older sister Gemma’s nickname as a child was Gem, so the singer decided to honor his sis (yet again) with a tattoo featuring the popular British biscuit known as an iced gem. Harry Styles’ iced gem cookie is inked on the underside of his left bicep, adjacent to his “PINGU,” star and “Hi” arm tattoos. Harry’s cookie tattoo is inked in black and white, and was first spotted on July 26, 2012.

Now this is a funny story. When you see someone with a completely random tattoo, you typically wonder if it was the result of a drunken night or a bet with a friend. Harry Styles’ Green Bay Packers tattoo was the latter. According to Harry, he had a bet with his American friend Cal, who is a big Packers fan, that if the team won the following day, Harry would get their logo tattooed on his arm. Due to his busy schedule, however, Harry wouldn’t have been able to hit the tattoo shop the following day, so he said said to his friend, “Are they gonna win?” and his friend said, “Yeah, they’re definitely gonna win.” So the ever-trusting Harry Styles went and got the logo inked that day, before they played. Unfortunately for Harry, the Packers ended up losing the game the next day! 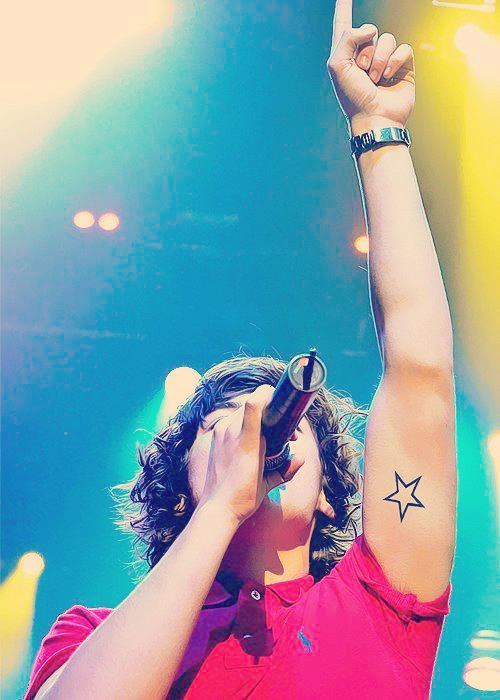 Considering he is already the proud owner of 40+ tattoos, it’s hard to imagine that Harry Styles’ first-ever tattoo was just inked in February 2012. It’s true though, Harry was first spotted with the new ink – a black star outline on the inside of his left arm – on February 2, so we’re going to assume he got the tat to celebrate his 18th birthday. Harry Styles’ star tattoo was inked by Freddy Negrete of L.A.’s Shamrock Social Club, and although it started out as just an outline, the singer eventually had the star filled in with black ink and got his surrender quote tattoo inked below it. Some people believe that Harry got the 5-pointed star tattoo as a tribute to the five members of One Direction, but others say that Harry just wanted a tattoo and let the artist decide what to ink. 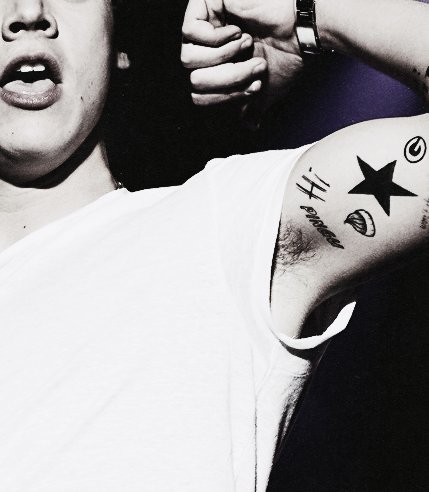 Now this tattoo seems like it was the result of a drunken night out. One of Harry Styles’ more random tattoos is the crudely handwritten “Hi” tat he has inked on the inside of the upper part of his left arm, near his iced gem and star tats. We’re not exactly sure when Harry Styles got the “Hi” tattoo inked on his arm, but he was first asked about the tat on July 2, 2012, and many people think the tattoo is actually band mate Louis’ handwriting. Harry’s “Hi” arm tattoo is pretty crude and actually looks like one of his One Direction buddies may have inked the piece himself, which would definitely not surprise us, considering they all seem to enjoy tattooing each other for some reason.

Also included in the little cluster of tattoos Harry Styles’ has on the inside of his left bicep is a tattoo that reads “PINGU” in capital letters. Harry got this arm tattoo inked by Kevin Paul on August 13, 2012, and the “PINGU” refers to the main penguin character from a 1980’s children’s claymation series of the same name. Apparently, Harry’s arm tattoo is a “bro tat” with Ed Sheeran, who opted for a similar tattoo but with the actual penguin image instead of the word. When asked how he got Harry to get the word “PINGU” inked on his arm, Ed told MTV News, “I mentioned it; he was like, ‘Alright then.’” Well that was easy; we’re surprised Harry didn’t go ahead and let Ed ink the PINGU tattoo, like his padlock arm tat.