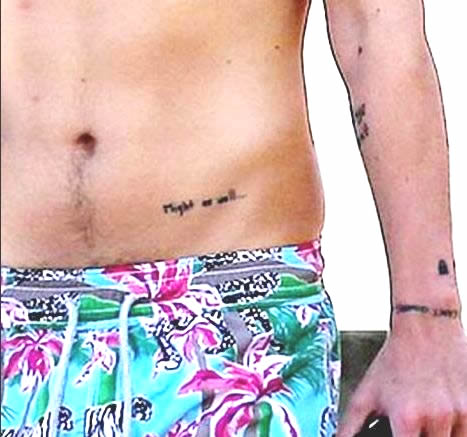 When it comes to his many tattoos, Harry Styles has focused mostly on his left arm and chest. He did however, get a tattoo on his waist in early 2013 that reads “Might as well…” in small black letters. Like many of Harry Styles’ other tattoos, the piece on his waist is pretty crude and looks like it could have been inked by one of his band mates, which wouldn’t be a far stretch. The boys apparently love to break out the needle and tattoo each other, and quite a few of Harry Styles’ imperfect tattoos were inked by a non-professional, including the padlock tattoo on his wrist and the screws on his ankles. Harry Styles first showed off his “Might as well…” waist tattoo in January 2013, when pictures surfaced of the tatted-up pop star vacationing in the Caribbean with then-girlfriend Taylor Swift.

Although Harry himself has said that all of his tattoos have personal meanings, we are really beginning to question this claim, especially when it comes to tattoos like the word “Hi” Harry has inked on his arm. Even the One Direction boys are questioning Harry’s tattoo choices, with Louis Tomlinson blurting out during an interview, “You got it because you think they look cool. There’s not that much meaning,” regarding Harry Styles’ sparrows chest tattoo. A tongue-in-cheek rumor about the meaning of Harry’s waist tattoo is “Might as well…” get more tattoos! Kidding aside, as one of Harry Styles’ tattoo artists said about the ink he has done for the singer, “They’re really personal to him – the reasons he had them done and stuff, so he doesn’t really want to announce what they are.” Guess we’ll just have to wait until Harry decides to spill the beans about the meaning behind his “Might as well…” waist tattoo!

2 Responses to: Harry Styles’ “Might as Well…” Tattoo on His Waist