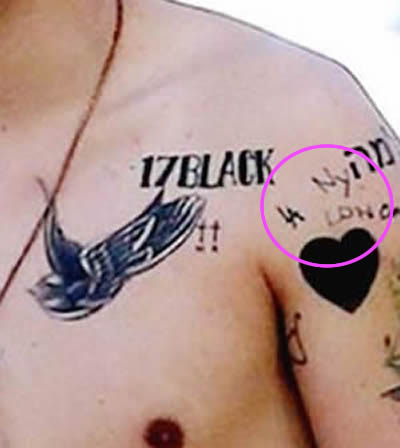 Like so many pop stars out there, Harry Styles views his body as a canvas and has devoted large portions of his skin to tattoo tributes honoring the people he loves and the places he has called home over the years. Harry’s left arm in particular has received quite a bit of tattoo attention recently and is covered in tiny, seemingly random tattoos, although they obviously mean something important to the British singer. Among these scattered arm tattoos are the tributes Harry Styles has to Los Angeles, New York and London – all cities the singer has a deep connection to. Check out a few of Harry Styles’ arm tattoos and the meaning behind the ink below!

Harry’s “LDN” Tattoo on His Arm

Being that Harry Styles was born and raised in the UK, it’s not hard to imagine what inspired the singer to get a tattoo dedicated to his home town of London on his arm. The pop star’s London tattoo, which reads “LDN” in black capital letters, is inked on his left arm, just above the large black heart Harry has on his shoulder. Harry Styles’ London tattoo, like many of the singer’s other tiny tattoos, is inked in a very rudimentary design that almost looks like he did it himself, which wouldn’t exactly surprise us considering his obvious addiction to ink. Although Harry and the other One Direction boys are almost always on the road, Harry Styles has made it clear that his heart is always in England, hence the “LDN” arm tattoo (and possibly the heart below it as well). 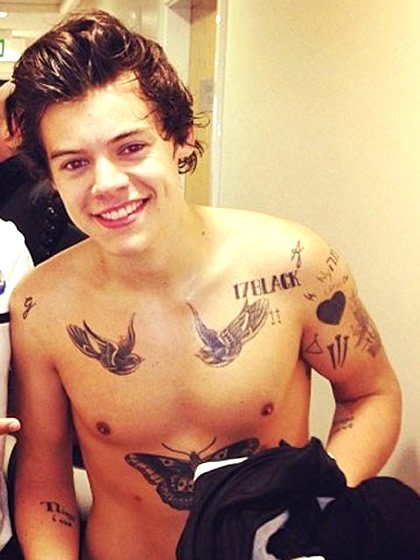 New York is another city where Harry Styles spent a lot of his time in the past, either performing with One Direction or hanging out with former girlfriend Taylor Swift. Apparently, Harry felt enough of a connection to New York to get a tat inspired by the Big Apple inked on his arm. Similar to his “LDN” tattoo, the singer sports a small “Ny” tattoo inked in black on his left shoulder, with the “N” being a capital letter and the “y” being a lower-case letter. Also similar to his London tat, Harry Styles’ New York-inspired tattoo features a pretty crude design. This has us wondering if the UK-born pop star has a do-it-yourself tattoo kit at home, because we find it VERY hard to believe that he actually paid money for this artwork.

As an artist in the music industry, you can’t have London and New York without LA, right? Well, when it comes to Harry Styles’ tattoos at least, you can’t. Bringing the city tattoo trend full circle, Harry has a tiny tattoo honoring Los Angeles with the letters “LA” inked on his left arm, right next to his “LDN” and “Ny” shoulder tattoos. Harry Styles hasn’t said much about his collection of city tattoos, but we’re guessing the significance behind the ink has something to do with the places he has come to know as home while he is on the road. We’re not entirely sure who inked Harry’s tiny arm tattoos, but his go-to tattoo artists are Kevin Paul and Freddy Negrete, so it’s possible one of the two is responsible for this artwork. Harry Styles’ “LA” tattoo looks slightly different than the New York and London tats, so we’re guessing the three were inked by different artists.

One Response to: Harry Styles’ NY, LA, and LDN Tattoos on His Arm