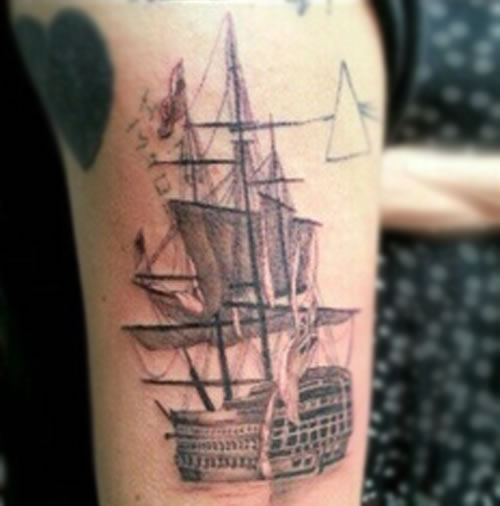 At only 18 years old, One Direction band member Harry Styles has one of the most impressive collections of tattoos of any other pop star – except maybe Chris Brown – but unlike Breezy, Harry enjoys getting tiny, seemingly random tattoos scattered across his body, with a heavy concentration on his arms for sure. “They are these tiny little bits and pieces,” tattoo artist Kevin Paul told MTV News about Harry Styles’ extensive tattoo collection. “Everyone’s different, like Zayn [Malik’s] got microphones and music stuff and, like, Harry has more personal things, like he has little things for his mom and all that kind of stuff.” Take it from us, it’s not easy keeping up with Harry Styles’ tattoos, but we’ve got a comprehensive collection of Harry’s numerous tattoos and what they all mean for you right here!

One of Harry Styles’ most well-known tattoos is the gigantic ship he had inked on the upper part of his left arm during a four-hour tattoo session in December 2012. Harry’s ship tattoo was surrounded by lots of controversy right off the bat, not only because he got the ink (and his infamous heart tattoo) in the company of then-girlfriend Taylor Swift, but also because the ship bears an uncanny resemblance to the tattoo worn by Taylor’s love interest in her “I Knew You Were Trouble” music video. Because of this, many people thought Harry Styles’ arm tattoo was a tribute to his leading lady, but the singer has since squashed those rumors, saying that he actually got the tat in honor of his home and family. According to Harry’s go-to tattoo artist, Freddy Negrete of L.A.’s Shamrock Shack tattoo parlor, “He wanted a realistic looking English ship, because he misses home and needs to remind himself that he’s homeward bound.”

Harry’s “Home Made” Tattoo on His Arm 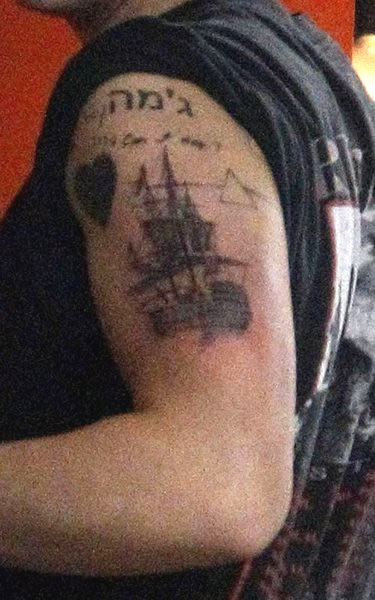 From homeward bound to home made, Harry Styles obviously cares a lot about his family; enough to have various tributes to them inked on his body. The singer shows no signs of slowing down with his newfound tattoo addiction, and skeptics are wondering whether the singer will eventually regret the 40-plus tattoos he already has scattered across his body. Although Harry hasn’t undergone tattoo removal (yet), it appears the pop star may have regretted at least one of his pieces of artwork – the “home made” phrase he had inked on the upper part of his left arm at some point in the last year or so. When Harry hit up the Shamrock Shack tattoo shop to get the large English ship added to his collection, he covered up part of the “home made” tat on his arm. We’re pretty glad Harry decided to ink over his “home made” tattoo with the intricate English ship because the former seriously looked like it was inked by a five-year-old kid.

Directly adjacent to Harry Styles’ ship tattoo is a very simple prism tattoo inspired by Pink Floyd’s iconic Dark Side of the Moon album cover, which depicts a triangle prism with white light being converted into the colors of the rainbow. Harry Styles’ arm tattoo is inked in black and white – which means it doesn’t depict the rainbow colors – and is obviously a tribute to the English rock band that he may even compare his own band to. Apparently, Harry Styles isn’t the only One Direction star who is a fan of Pink Floyd though. In April 2013, Zayn Malik got an identical Pink Floyd prism tattoo inked on the inside of his right bicep. These One Direction boys love matchy-matchy band tattoos, so we’re just waiting for the rest of them to get inked with a tattoo inspired by Pink Floyd!