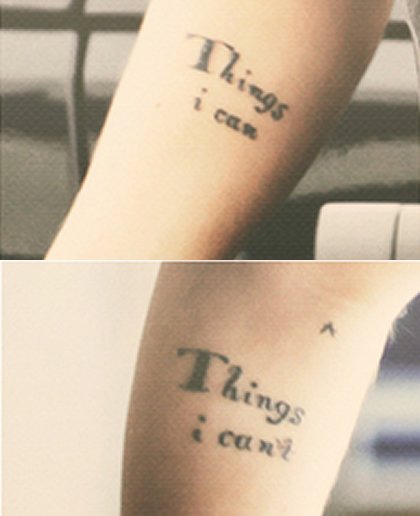 Two of Harry Styles’ most famous tattoos are the “Things i can” and “Things i can’t” tats the singer sports on his right and left arms. On the inside of his right forearm, Harry has the phrase “Things i can” inked in a crude, funky sort of font with black ink. In the same spot on his left forearm, the pop star has another tattoo that reads “Things i can’t,” which is inked in black just below the tiny letter “A” Harry got as a tribute to his mother, Anne Cox. Although Harry has quite a few tattoos inked on his left arm, including a padlock, Green Bay Packers logo, Aquarius symbol and the word “Pingu,” his “Things i can” piece is the only tat the singer has on his right arm to date. Hmm…that sounds a bit like Lady Gaga to us!

At first glimpse, it appeared that Harry Styles’ matching arm tattoos were unfinished, but the pop star apparently likes the phrases just the way they are because he never added to them. Shortly after Harry got the arm tattoos inked, he was asked about their significance, and Niall Horan was quick to comment, “It’s a London thing.” What’s that about boys? Harry Styles revealed the matching arm tattoos after landing at Los Angeles International Airport back in November 2012, but he actually got the artwork inked in Dublin on October 12, 2012. During an appearance on an Irish talk show that same day, Harry Styles said he had been to the tattoo parlor for new ink, but refused to show off the tattoos since they were still bandaged up. 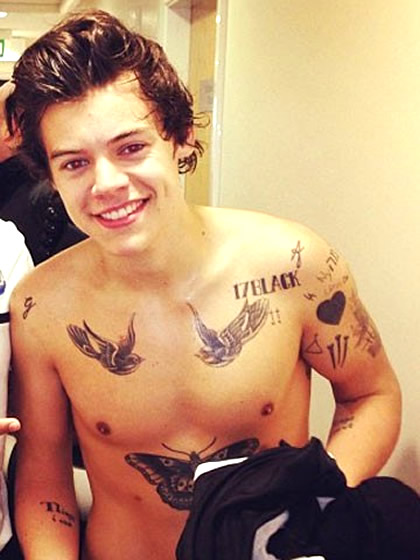 Although Harry Styles’ hasn’t divulged the exact meaning behind his mysterious “Things i can” and Things i can’t” tattoos, we have a feeling they might have something to do with the well-known serenity prayer that reads “God, grant me the serenity to accept the things I cannot change, the courage to change the things I can, and wisdom to know the difference.” Along the same lines, Harry has a tattoo inked around his left wrist that says “I can’t change” in capital letters.