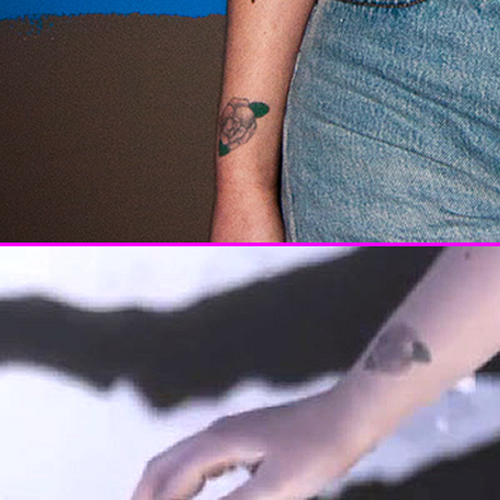 Before covering it up with her portrait tattoo of the Roman goddess Venus, Iggy Azalea had a small tattoo of a flower inked on the side of her right forearm, near her wrist. Iggy hasn’t said much in public about the meaning behind her covered-up flower tattoo, which she says was “ugly,” but our guess is that it was a reminder of her home in Mullumbimby, New South Wales, Australia, where she grew up and where her parents still live to this day. Iggy calls Mullumbimby a “two-street sh*thole,” where she worked on a farm and looked after cows, and apparently one of those two streets is Azalea Street, which is the road she grew up on, and which inspired her stage name and possibly her flower tattoo as well.

Traditionally, flower tattoos can symbolize a variety of different things, including love, elegance, wealth, beauty, spirituality and new beginnings, depending on the type of flower depicted in the tattoo. Azaleas in particular have some historical significance, and the flowers have their own special meaning. The most popular story behind the azalea flower is that it is connected to the poetry of Du Fu, who claimed that the flower is immortal because of its beauty. Azalea flowers bloom in both the summer, in the Southern Hemisphere, and in the winter, in the Northern Hemisphere, which could be a tribute to Iggy’s connection to both Australia and America. Also, in Chinese, the azalea is known as “Sixiang Shu,” which means “thinking of home bush.”

In spite of her stage name being “Azalea,” Iggy is no innocent little flower. She may have come from a small town in Australia of only 3,000 people, but she has certainly come a long way since then. Since leaving her family behind to move to America and try her hand at rapping at the age of 16, she has scored a number one rap album and landed two singles in the Top 10 Billboard Singles. She has a certain affinity for hyper-sexualized and provocative songs, like the track “Pu$$y” off her Ignorant Art mixtape, and in 2012, she became the first female, non-American rapper to be featured in XXL magazine’s “Top 10 Freshman” list, which was a pretty big deal for her.

Iggy’s Reminder of Her Home & Family

So, the story is, Iggy Azalea covered up her flower tat in November 2012, in favor of her Birth of Venus tattoo, and during a June 2013 interview at Power 106 LA FM studios in Los Angeles, she talks about the portrait tattoo on her arm, saying the significant ink “is awesome and it covers up my old ugly tattoo.” It’s true that Iggy Azalea’s tattoo of the flower on her wrist may have been reminder of home and her family, which makes it surprising that she would choose to cover it up. However, now that we know that her stage name is derived from the street she grew up on and her beloved childhood dog “Iggy,” we’d have to say that she has covered all the bases in the “remembering where you came from” department.