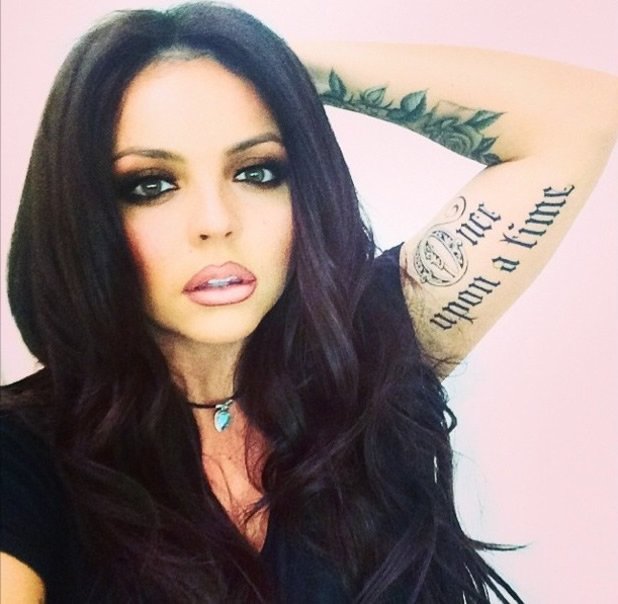 Of all the Little Mix ladies, 23-year-old Jesy Nelson has kept the most busy on the tattoo front, and this week the singer took to the official Little Mix Instagram account to show off a brand-new “Once Upon a Time” tattoo she had inked on her bicep. Jesy Nelson’s new tattoo comes almost exactly one year after she debuted the bad-ass skull and rose tattoo on her forearm last February, and is inked just above that tat on the upper part of her arm.

Jesy Nelson’s new arm tattoo reads “Once Upon a Time” in a bold, black gothic font, with the “O” inked in an ornate design that you would typically find at the beginning of an old-school fairy tale book. Jesy hasn’t said anything in public about the meaning behind her “Once Upon a Time” arm tattoo, but the 23-year-old singer is known for her growing collection of ink inspired by meaningful quotes and phrases. Back in 2013, Jesy Nelson revealed two of her earliest tattoos, including a quote on her right bicep that reads, “Music is the strongest form of magic,” and another encircling her right thigh, reading, “A tiger never loses sleep over the opinion of sheep.”

Upon revealing her skull and rose forearm tattoo on Instagram last year, Jesy captioned the photo, “New tattttt added to the famalam x,” which led us to believe that the pop star was planning to welcome plenty of new additions to the family in the near future. Now that she’s added this new “Once Upon a Time” ink to the inside of her left bicep, our suspicions that Jesy Nelson was planning a full sleeve on that arm have been all but confirmed. Now all she has to do is add some ink to her wrist and the outside of her upper left arm, and she will be well on her way to a full-sleeve tattoo that even Justin Bieber would be jealous of!