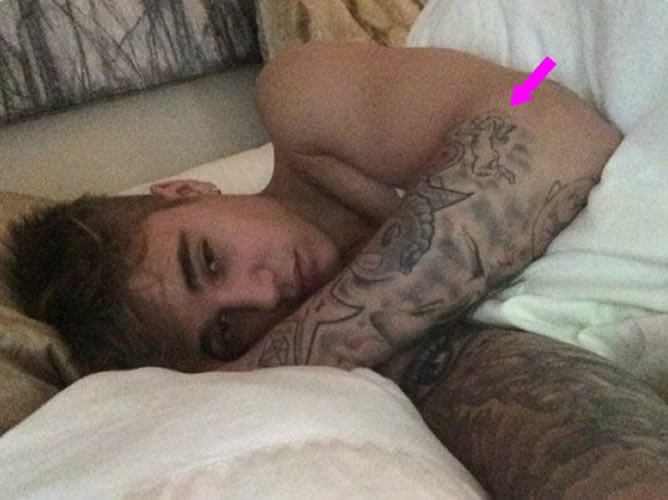 We here at Pop Star Tats, along with Beliebers worldwide, know two things very clearly about Justin Bieber. One: he loves his tattoos, and two: he loves taking shirtless pictures of himself to show off his ink to all the adoring Beliebers around the world. So it should come as no surprise that Justin recently revealed a hard-to-spot tattoo that has been hiding out in the shading of his right half-sleeve, in his favorite way – a sleepy shirtless selfie.

So the question is, what is this previously hidden tattoo Justin got, and when did he get it? Well, we can sort of see it in pictures dating back to the end of March, when Justin was rumored to be reuniting with on-again, off-again girlfriend Selena Gomez, which seems to be his favorite past-time. Now that we’ve gotten a better picture of the tattoo on the upper part of Justin right half-sleeve (which actually appears to be his left sleeve in this mirrored shot), we can see quite clearly the image of a Valentine’s-style cherub, or angel.

Our best guess at the meaning behind Justin’s cherub tattoo is it must have something to do with his undying love for Selena. It could be Justin’s way of saying he’s been love-struck by Selena, and Cupid has tied his arrow to hers, which explains why he can’t help but continue to pursue the object of his affection. Also, having an angel of love on his arm may be a sign that he is “wearing his heart on his sleeve,” as the old saying goes, which could be a symbol of emotional openness or vulnerability.

One could also make the argument that Justin sees himself as a Cupid or angel of love himself. After all, he did sprout some wings and fly above the crowd during his Believe tour, and he also has millions of adoring, loving and committed fans no matter where he goes in the world. So, it could be the love song crooner is using his charms to win the world over one love arrow “hit” song at a time.

There is one thing we are one hundred percent sure about though; everyone can get a little giggle from seeing the tiny angel’s naked butt on Justin’s arm. We sure did!