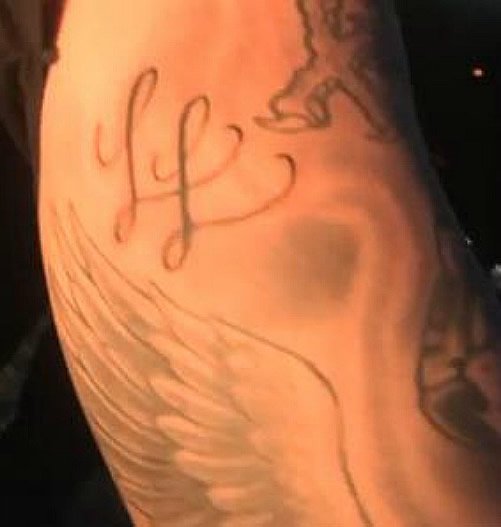 It’s been almost an entire year since Justin Bieber debuted a new tattoo, and the inked-up singer has just added a new piece to his upper arm featuring two capital letter L’s. Following a marathon recording session this week – which seems to be exactly when Justin likes to get inked, possibly because it’s such an inspiring time for him – the pop star was confronted by a paparazzo with a video camera, and he decided to relent and reveal his latest tat, as well as give a little inside scoop about his upcoming album. Justin Bieber’s tattoo features two script letter L’s intertwined with one another and located just above the eagle tattoo inked on the singer’s upper left arm.

In a PopCandiesTV video of Justin Bieber grabbing some breakfast in L.A. this week, after an all-nighter at the recording studio, the inked-up pop star showed off his brand-new “LL” tattoo, saying, “I just got back from the studio, I just got this new tattoo. [It means] when you’re low, lift. Basically, when your head is low, lift it up and you’re never gonna live in shame.” The Biebs also said that he’s working on his new album, the first in almost three years, and that there may be a tour to go along with it. A lot has happened in those three years, and according to Justin himself, he “lost hope” for a while, but he’s taking this upcoming album in a new direction that will be all about “getting out that rut.”

It was just a couple of months ago during an exclusive interview with Men’s Health that Justin Bieber first mentioned wanting a new “LL” tattoo, although he originally planned to get it on his chest. When asked about his body art, the Biebs said, “Like the tattoos and stuff? Maybe that’s like a cover for me being a softy,” and in reference to the next tattoo he had planned, he said, “I want ‘LL’ tatted right here [chest]. When you’re Low, Lift. Because we often want to keep our heads down. But we should lift our heads.” Although Justin Bieber has come off as a bit of a bad boy and brat in recent years, many of his newer tattoos have followed this same theme of keeping your head up, forgiving others and having patience.

What do you all think of Justin Bieber’s new “LL” arm tattoo and the meaning behind the symbolic ink?? Let us know in the comments section below!