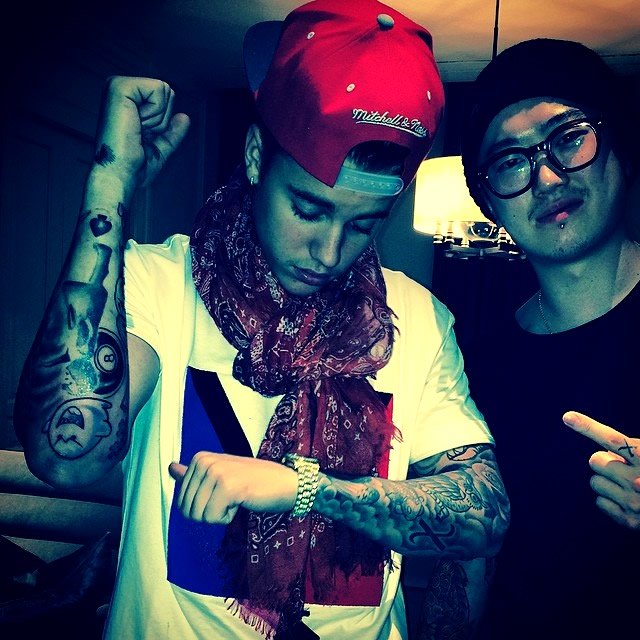 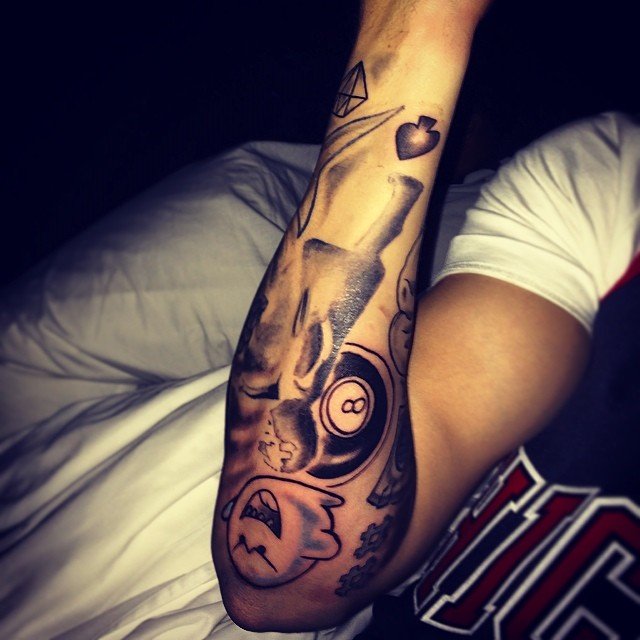 It’s been less than a week since Justin Bieber revealed a bunch of new tattoos on his right arm and the inked-up singer is at it again, adding close to a dozen more tats in what appears to be a nearly complete half-sleeve that he is obviously very thrilled with. The 20-year-old took to Instagram on March 25, 2014 to debut nearly a dozen new tattoos on his right arm, in addition to the five or so fresh sleeve tattoos the Biebs showed off on that same arm just last week. In one of his new Instagram pictures, the pop star is posing with the tattoo artist responsible for Justin’s impressive new ink, and the caption says: “Love!!!! @seunghyunjotattoos great job man.” We knew the Biebs was itching for another full sleeve, but this is crazy! Read about all of Justin Bieber’s tattoos in his half-sleeve below.

We caught a glimpse of Bieber’s first round of new tattoos in a series of pictures the singer quietly posted to Instagram last week, following a mammoth tattoo session at a Toronto recording studio with Forever Young Ink that lasted until 5:00 in the morning on March 15. This second round of Justin Bieber tattoos was apparently done courtesy of the same tattoo artist, a guy named Seunghyun Jo of Forever Young Ink in Canada. Following the first tattoo session, Seunghyun Jo captioned an image of him and JB: “Thanks @justinbieber for inviting me to your studio! It was a long night of tattooing you but worth it!!” The new tattoos in Justin Bieber’s half-sleeve include the following: 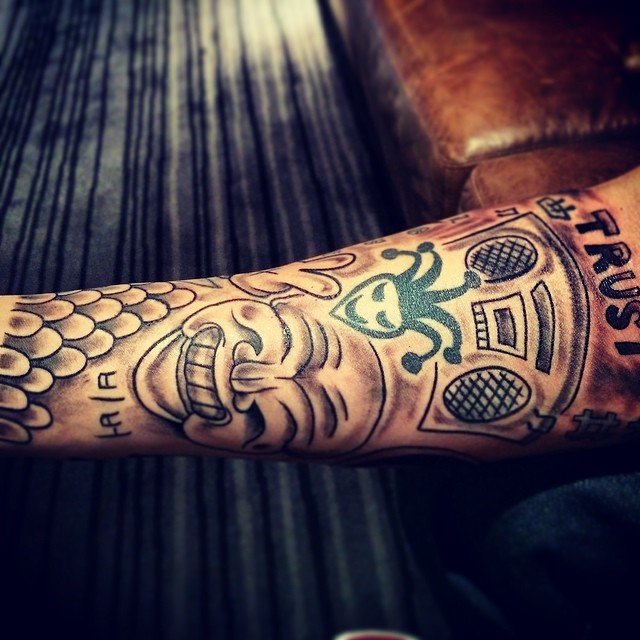 While Justin’s left sleeve is a mix of animals – including a koi fish, tiger, owl and eagle tattoos – the singer appears to have drawn inspiration from his love for graffiti artwork when deciding on tattoos for his right sleeve. In addition to the tattoos he revealed this week, Justin Bieber’s tattoos on his right arm include a graffiti-style cartoon scene featuring a star with X’s for eyes, a red heart, a cartoon hand throwing a peace sign, a cartoon face and a diamond tat on his wrist. Justin is clearly obsessed with getting new tattoos, but he is apparently planning to take a break from getting inked for the time being. In the final tattoo pic he posted to Instagram, his caption read: “Done with tats 4 a while…Where I wanna be…” Once a tattoo addict, always a tattoo addict though, and we can’t imagine it will be very long before Justin decides to complete his right-arm sleeve!

2 Responses to: Justin Bieber Adds Close to a Dozen New Tattoos to His Half-Sleeve