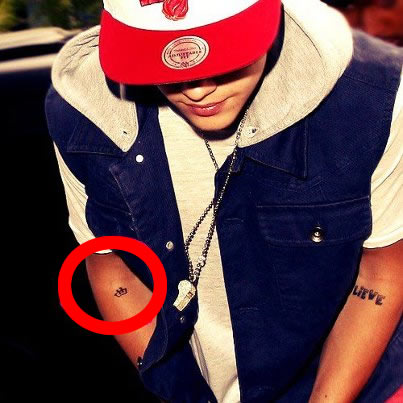 Justin Bieber may ask himself WWJD (What Would Jesus Do) from time to time, but he should really be wondering WWSS – what will Selena say? Exactly two weeks after getting his Believe tattoo Justin Bieber got a new tattoo on his arm with a similar theme. Justin Bieber’s new tattoo is a Japanese Kanji symbol that means “music,” which is clearly something important to Bieber. But what will one of the most important people in JB’s life, girlfriend Selena Gomez, think of all the new ink the Biebs has gotten so far in 2012? Even though Selena has a couple small tats of her own, Justin Bieber’s tattoo collection has tripled just since the beginning of this year, and the 18-year-old seems to have caught the tattoo bug. Pictures of the new Justin Bieber tattoo cropped up on July 4, and even though the Bieb’s hasn’t divulged much about the arm ink yet, we’re sure he’ll be bombarded with questions about the tat in no time. 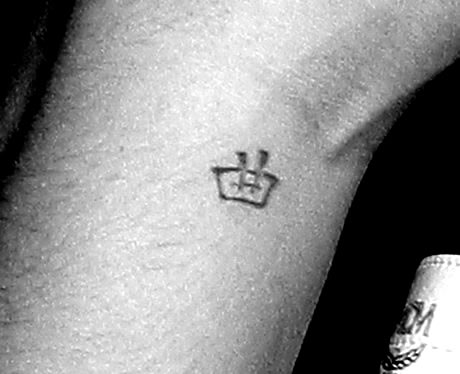 Justin Bieber’s new tattoo is inked in black and white and is located on his right arm, just below the inside of his elbow. It seems like Bieber has moved away from his religion-inspired tattoos, even if it’s only temporarily, and embraced instead his love of music, which is the meaning of this Japanese symbol.  It was just on June 20, 2012 that Bieber debuted his other arm tat, the word “believe” inked in black block letters on his left arm, and at this rate, Bieber could be well on his way to inking up his body Chris Brown-style. Chris Browns tattoos cover most of his body, and Justin Bieber now has six tats on his legs, arms, hip and side, including the Believe tat on his left arm. “Believe” is the name of Justin Bieber’s newest album, and the Justin Bieber Believe tattoo has garnered plenty of attention in the past two weeks, especially from people who think the singer should slow down with the tattoos. It’s obvious that the Biebs loves music though, and it’s also obvious that he’s a fan of body art, so why not merge them into a music tattoo? That must have been what Bieber was thinking when he got his new Japanese arm tattoo.

Justin Bieber Tattoos in 2012 So Far 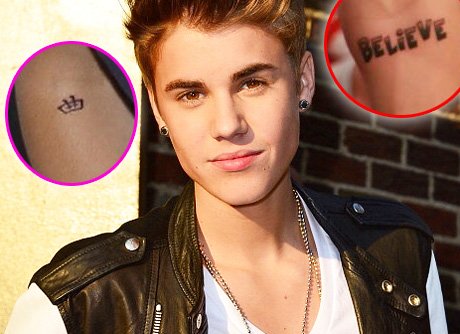 Justin Bieber’s New Year’s resolution must have been to add to his body art, because he has gotten four tattoos so far in 2012 alone. While Bieber’s Jesus and praying hands tats on his left leg clearly represent his Christian faith, the new Justin Bieber tattoos on his arms give fans a new look at a major inspiration in Bieber’s life – music. Other Justin Bieber tattoos he has gotten in recent years include a small bird tattoo inked on his left hip, which he got on his sixteenth birthday, and the Hebrew tattoo that says “Jesus” on his left side, which matches a tat his dad got at the same time. Although it’s hard to believe that the young, sweet Selena Gomez approves of her beau’s rapidly-growing tattoo collection, rumor has it that Selena Gomez and Justin Bieber are planning to get matching tats as a tribute to the love they have for one another. Although they haven’t yet gotten the matching tattoos, it certainly isn’t because Justin Bieber is afraid of the needle!