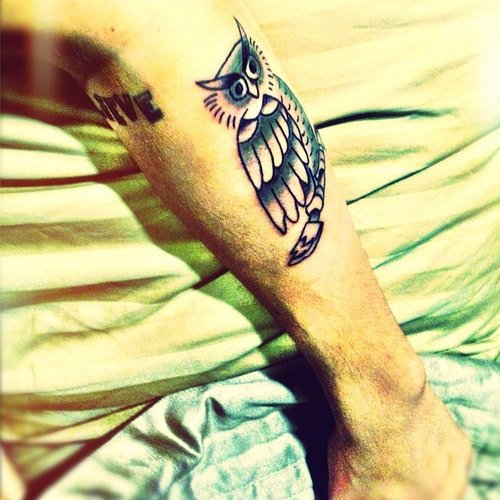 Justin Bieber has added yet another tattoo to his collection, this time inking a permanent mark of “wisdom” on his body. Bieber’s new tattoo is inked on his left arm and features a relatively large black and white image of a wise-looking owl perched on what appears to be a branch. The Biebs took to Instagram on October 28, 2012, to reveal his new arm tattoo, posting the ink along with the message, “Befo the paps get me.” Apparently, Justin Bieber wanted to share his new tattoo with fans before the paparazzi had a chance to steal his thunder and snap a pic of the owl ink for all to see. After the pop star unveiled the owl tat, a devoted Bieber fan later posted the following message on Twitter: “OWL symbolizes: Wise, Majestic and Powerful. Best tattoo ever.”

Less than three weeks after punking fans with the “leaked” pics of himself in the buff as part of a publicity stunt for his “Beauty and a Beat” video, Bieber is in the spotlight yet again, this time for getting his eighth tattoo. It’s been over two months since Bieber unveiled the crown tattoo on his chest, and in the world of pop star tattoos, that’s apparently long enough. JB hit the tattoo parlor yet again, this time opting for a tat that is very different from all the rest. Justin Bieber’s tattoo of an owl is inked on the outside of his left forearm, to the right of his “Believe” album tattoo. Compared to the other tattoos on his arms, JB’s owl tattoo is pretty large, but like all of his other tats, it’s inked in black and white.

Justin’s eighth tattoo (and probably not his last) has a different meaning than many of his other tats – which relate to his music career and religious beliefs – but there is a definite connection between the owl and his music. Take a peek at Justin Bieber’s owl tattoo and you’ll assume the owl is perched on some kind of branch. Wrong. In a very subtle and clever move, JB has the owl in his arm tattoo inked so that it’s perched on the key that you see during the opening countdown of the pop star’s Believe tour. The key, which is bronze and features a script letter “B” engraved in the wing-like side is shown on a huge screen as the clock counts down to the start of the show. Because Justin’s owl tattoo is also inked right next to his “Believe” tattoo, the connection is even more obvious.

7 Responses to: Justin Bieber’s Owl Tattoo on His Arm