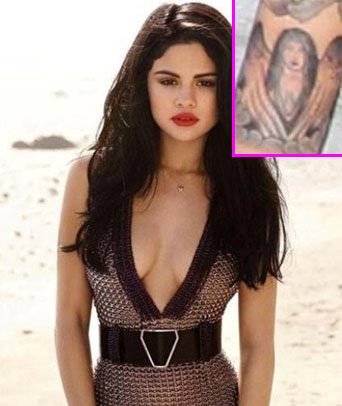 On the same day that he revealed a new tiger tat on his bicep, Justin Bieber also debuted some new ink on his left wrist – a medium-sized angel tattoo with the face of a woman, who looks JUST LIKE Selena Gomez. The angel tat on Justin Bieber’s wrist was photographed by paparazzi as the singer was leaving his hotel in Stockholm, Sweden on April 23. With the extensive ink the Biebs already had on his left arm – including his owl tattoo, the Christ symbol “X,” and the new koi tattoo he revealed on April 20 – these two new tattoo additions put Bieber well on his way to having a full sleeve tattoo! The Biebs obviously enjoys getting inked and he has celebrated a few of the stops on his Believe tour with some new ink. The next leg of his tour is scheduled this weekend in Russia, so stay tuned to find out if the singer gets inked yet again! 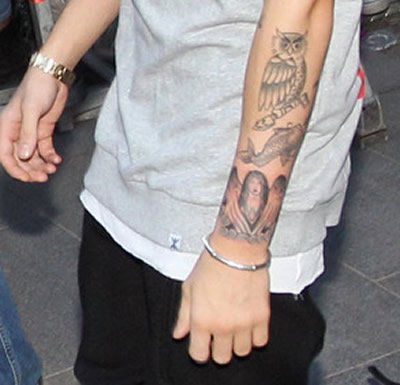 Bieber’s angel wrist tattoo was first glimpsed on April 23, but it was actually inked the previous night by tattoo artist Daniel Grunditz at the Grand Hotel in Stockholm, where the singer was staying during his Believe tour. The tattoo features an image that appears to be a guardian angel with wings inked on the outside of his left wrist, and, unlike most of his other ink, the arm tattoo actually includes some muted colors. The angel in the wrist tat is surrounded by puffy light blue clouds, sports long dark hair and pink-colored wings, and looks just like a photo of Bieber’s on-again, off-again girlfriend Selena Gomez. There are quite a few possible meanings of Justin Bieber’s angel tattoo, but we think it is most likely a little body shrine to Selena.  Some speculate that it could represent a loved one that he has lost or possibly a “goddess”…like Goddess Selena?? Hmm.  Check out the cleavage resemblance, coincidence?  We think not.

Bieber is Growing Up, Getting Inked, and Getting Back Together?

Justin Bieber has been making headlines quite a bit lately, but not just because of his new tattoos. According to the singer, he knows that he is “young” and “makes mistakes,” but he claims the actions that have subjected him to public scrutiny lately are just a “part of growing up.” There’s no denying the singer is growing up; the 19-year-old now sports 14 tattoos on his body and he shows no sign of slowing down any time soon. Another part of growing up: possibly getting back together with his leading lady, Selena Gomez. The singer – who has a couple small tattoos of her own – joined the Biebs in Oslo and then accompanied him to Copenhagen last week, then he pretty much got a tattoo of her.  We wonder what the squeaky clean Disney darling thinks of his new ink!

One Response to: Justin Bieber’s Selena Gomez Angel Tattoo on His Wrist