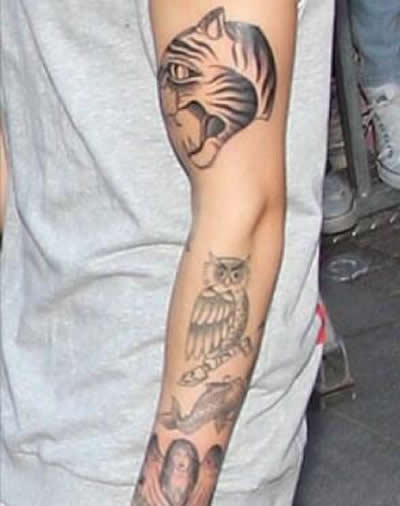 Justin Bieber added to his tattoo collection yet again, revealing a vicious-looking tiger tat on his left bicep as he left his hotel in Stockholm, Sweden on April 23. The tiger wasn’t Bieber’s only new tattoo addition though; he also got a large angel tattoo inked on his left arm, near his wrist, at around the same time, and gave himself some good fortune with a koi fish tattoo on the same arm just a few days prior, on April 20. Justin Bieber is well on his way to having a full sleeve tattoo on his left arm, although some have speculated that the Biebs may actually be trying to start his own personal zoo, what with the owl tat he also has inked on his left arm. We’re sure it won’t be too long before he has most of his left arm covered up with ink!

The new tiger tattoo is inked on the outside of Justin Bieber’s left bicep, with the open mouth of the tiger facing his ribcage. The arm tattoo is inked in black and white, like most of the singer’s other ink, and looks pretty ferocious, thanks to the tiger’s bared teeth and creepy-looking eyes. The Biebs may have revealed his new ink on April 23, but the tiger tattoo was actually inked the previous night by tattoo artist Daniel Grunditz at the Grand Hotel, where the pop star was staying in Stockholm. Justin Bieber hasn’t said anything in public about the meaning of his tiger arm tattoo, but you know we have our guesses!

Bieber Sees Himself as a Predator 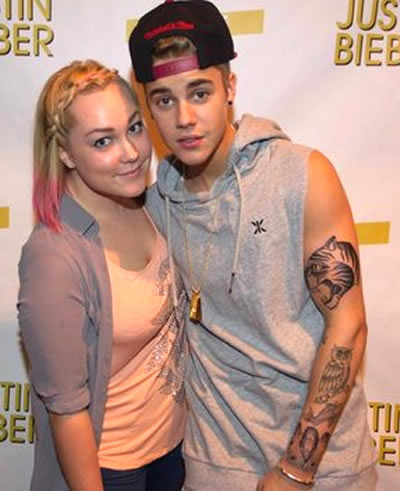 One of the most common tiger tattoo meanings is power or strength, which is similar in theme to the crown tattoo the Biebs recently had inked on his chest. The pop star sees himself as a force to reckon with in the pop world, and the crown tat effectively branded him as the prince of pop, if not the king. Similarly, the tiger may not be the king of the jungle, but he is a ferocious hunter and predator, so Justin Bieber may have gotten the arm tat as a symbol of his success and his presence at the top of the pop music food chain.

Justin Bieber’s tiger and angel arm tats mark his 14th and 15th tattoos to date, which is some serious ink for such a young fella. He did just turn the big 1-9 on March 1 though, so maybe the pop star is just trying to extend his birthday celebration with his awesome new tattoos. Only the Biebs could pull off three new tats in one month without breaking a sweat! Stay tuned and we will keep you updated on all of the pop star’s new tattoos!