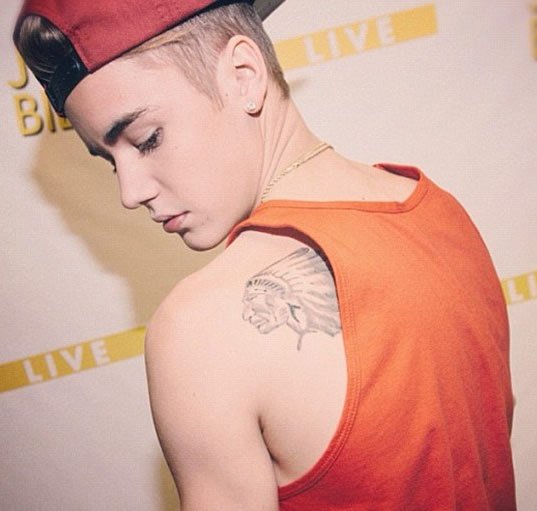 Justin Bieber kicked off 2013 with a brand new tattoo, this time inking a tribute to his late grandfather on his left shoulder blade. Diverging from his religious-themed tats for now, the Biebs took a more sentimental approach when choosing his shoulder tattoo – one that reminds him of his beloved grandpa. On January 6, Justin Bieber posted a pic on Instagram of the Canadian Stratford Cullitons hockey team logo of a Native American man’s face. The singer got the image permanently inked on his left shoulder in memory of his grandfather, who recently passed away. The Native American tattoo is the first tattoo Bieber got on his back.

Tattoo for Grandpa was Inspired by Canadian Hockey Team

Justin Bieber is apparently a big fan of the Canadian hockey team, which was originally called the Stratford Braves, and then the Stratford Warriors, before they settled for a moniker in honor of the Culliton Brothers, who sponsored the team in the 1970s. The back / shoulder tattoo is inked in black and white and features the side profile of a pretty fierce-looking Native American chief wearing a traditional headdress. In one photo caption, the Biebs wrote, “My grandfather always took me to the stratford culliton every friday night this is for u Grampa…My man @chenterios hooked it up.” The logo of the Stratford Cullitons is believed to be inspired by the fact that Ontario is home to a large amount of Native American nations.

The Biebs Went “Under the Gun” for New Tattoo

Justin Bieber’s tat on his shoulder was inked by Chente Rios of Under the Gun Tattoo in Los Angeles, which is also where Selena Gomez got her music note tat on her wrist, in February 2012. The singer’s Native American tattoo comes just one week after he posted a pic of a new addition to his praying hands tattoo – a collection of black and white roses on his leg – which he posted on December 30, 2012 while vacationing in Mexico. Justin Bieber posed for several shirtless photos to show off every angle of his hockey-themed tattoo, which is his tenth tattoo so far, so take your pick!