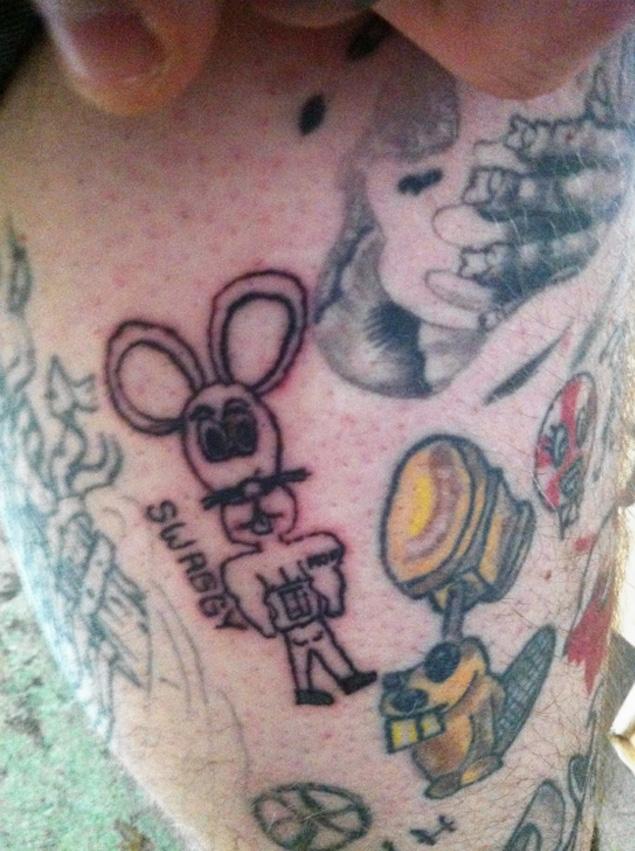 A little known fact about Justin Bieber: not only does he love getting tattoos inked all over his body, but he was also a tattoo artist back in the day. Well….for one day at least, back in June 2012. On the same day that he got his “Believe” tattoo inked on his arm, the Biebs turned the gun on celebrity tattoo artist Keith “Bang Bang” McCurdy, of the Lower East Side tattoo shop in New York City, and added his own design to the artist’s extensive collection of ink. Not only is Bang Bang known for the tattoos he has inked on the bodies of some of the most famous pop stars, but he is also famous for letting those same celebrities – including Rihanna, Chris Brown, Katy Perry and now Justin Bieber – ink tattoos on his own body. Now that’s trust!

Pics of the 15-minute tattoo session show a nervous Justin Bieber in full concentration mode as he inked a black and white image of a musclar mouse on Bang Bang’s leg, along with the word “Swaggy,” which is the name of Bieber’s cartoon alter-ego. The mouse tat was definitely pretty shaky, but all in all, not bad for the singer’s first-ever tattoo. Bieber’s tattoo session may not have been all fun and games though. Apparently, the pop star could face a $2,000 fine for tattooing without a license, which is illegal in New York state. Rihanna found that out the hard way in June 2009, when she inked tattoos on several people, including an umbrella with an “R” on Bang Bang’s leg. 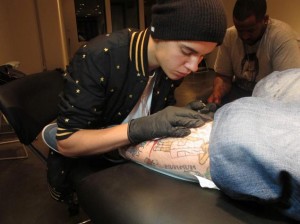 The same month that Bang Bang received RiRi’s signature umbrella (ella….ella) tattoo, Chris Brown added his own cartoonish tat to Bang Bang’s impressive collection, although the pair reportedly drove to a different state for the session so Breezy wouldn’t get in trouble. There’s no word on why the Biebs wasn’t afforded the same consideration. Bang Bang did seem pleased with the tattoo he got from Justin Bieber though, tweeting “Thx for my tat bro!” following the session. The New York City Health Department, however, seems less than amused, and could decide to cite Bang Bang’s tattoo shop (yet again) for “operating with an unlicensed tattoo artist on site.”