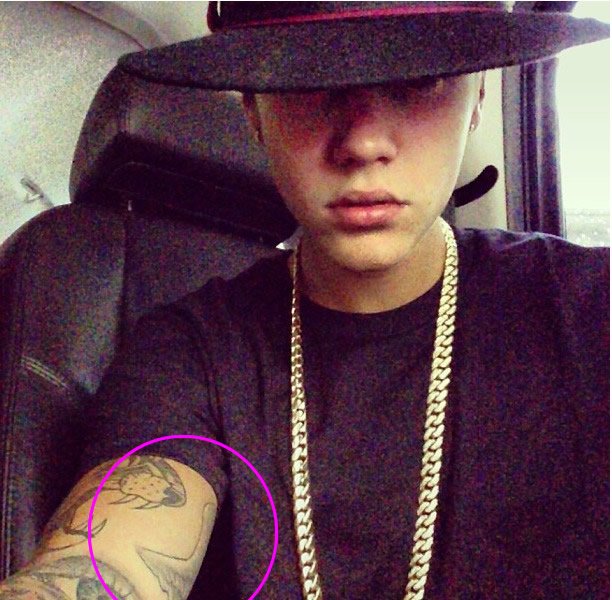 As it turns out, Justin Bieber did not get the rumored Virgin Mary tattoo inked on August 25th at Deer’s Eye Studio in Santa Fe, CA, but this leaves the question: “what did he get?” We have found some recent pics with hints of Justin’s latest tattoo on the inner part of his bicep, but its tough to distinguish exactly what it is. A commenter name “Lolly” has said that the inner-bicep tattoo is that of a “wing” or something like it. Looking at these pics, it could possibly be a wing tattoo, but it looks like there is more to it. We were thinking it could also be a star fish, a bird of some sort (with it’s tail showing in the pic), a fish, or possibly an angel with its wings spread. Hmmm, anyone out there found some better pics?? This tat is gonna be a tough one to spot being that it is inked on the inside of his upper arm. We are dying to know what this is. Quick! somebody go and high-five Justin Bieber to get some shots!!

It has also been rumored that Justin Bieber also got a quote tattoo on his shoulder, possible a psalm or biblical quote. Not quite sure about this new inking yet, but we are looking into it with the quickness. A quote tattoo like this wouldn’t be surprising, the Biebs hasn’t gotten any quotes to date, unlike pop stars Miley Cyrus, Rihanna, and pretty much all of One Direction. Particularly with his affinity for religious tats, this new addition would fit right in. Stay tuned for now, we’ll keep you updated.

This latest pic comes from the “Lolly” video with Maejor Ali, where we can ALMOST make out the new tattoo, but not quite. Any guesses out there, please let us know in the comments section below! 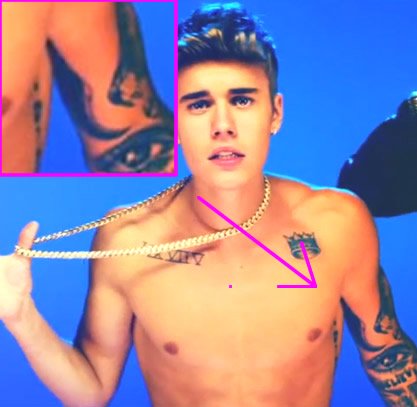 One Response to: Justin Bieber’s Latest Tattoo is NOT of The Virgin Mary, So What is It?