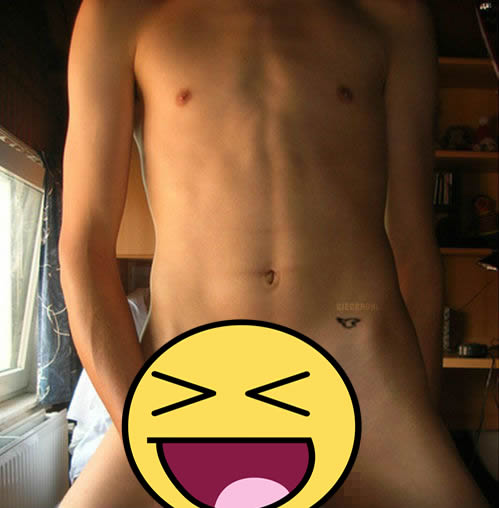 A risque picture of what appears to be Justin Bieber was leaked online this week, portraying a full-frontal image of a male that looks an awful lot like the Biebs – seagull tattoo on hip and all. Bieber took to Twitter on October 9 to bash the thief that stole his computer and camera from his tour manager’s hotel room during a show in Washington, which is apparently where the pic of Bieber in the buff came from. It’s no sex tape, but it does show Justin Bieber in bare form! Check it out.

Someone has leaked at least one personal picture of Justin Bieber online, and it’s not the coy “oops-but-aren’t-I-super-sexy?” pic like Miley Cyrus’ suggestive bathtub photo – which she probably “leaked” to the media herself. This photo is a full-frontal shot of Bieber in the buff that required some serious blurring action, and the singer doesn’t seem too pleased that the image landed in someone else’s hands. The photo shows what could be Justin Bieber kneeling on a bed, wearing nothing but the telltale seagull tattoo inked on his left hip. The photo was posted on Twitter just hours after the Bieb’s personal computer and camera were stolen from his tour manager’s room during a show in Washington, which gives the photo at least a little credibility. Without that distinctive seagull tattoo, the photo could be of just about anyone, since you can’t see the person’s face. But let’s be real – what other guy has a tiny outline of a bird tattooed on his hip? 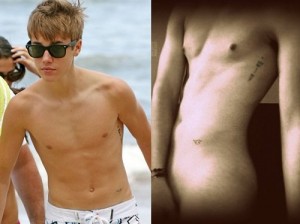 There hasn’t been an official comment from the Bieber camp yet about the bare Justin Bieber pic, but the 18-year-old did take to Twitter on October 9 to give the thief a piece of his mind. “Yesterday during the show, me and my tour manager Josh had some stuff stolen. Really sucks. People should respect other’s property,” the Biebs tweeted. “I had a lot of personal footage on that computer and camera and that is what bothers me the most. #lame #norespect.” Now we all know what kind of personal footage JB may have been referring to – the kind that you don’t want your mom to see when she searches for the top news stories of the week. Bieber recovered from the humiliating leaked photo – which he never even mentioned – pretty easily though, tweeting later on: “About to see my fans…my beliebers…and it’s gonna BE ALRIGHT. #showtime #CANADA.”

Is the Pic of Beiber in the Buff Real?

For all the people who say the racy Justin Bieber photo is real, there are just as many people claiming the pic is a fraud. Their “evidence” though – which involves the shape and size of Bieber’s…belly button and nipples – is less than scientific, and it’s just as likely that Bieber snapped a shot intended for his leading lady, Selena Gomez, and never deleted it off his camera or computer. How many other celebrities have fallen victim to similar mistakes? Chris Brown, Rihanna, Blake Lively, Scarlett Johansson, Mila Kunis and Christina Aguilera, to name just a few. And sure, Bieber’s seagull tattoo could have been Photoshopped onto the torso in the pic, but it sure does look like the real deal! Tell us what you think of the revealing Justin Bieber pic.