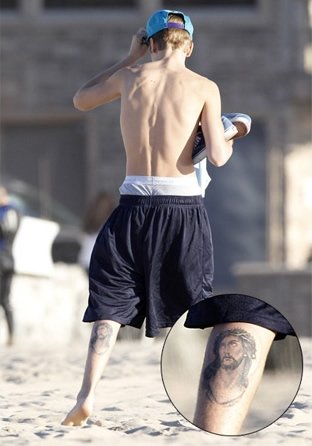 New pictures have emerged of Justin Bieber with a tattoo on his left calf, and the image is of Jesus wearing a crown of thorns. Bieber was photographed on the beach in Venice, California on Wednesday and again on Friday in Studio City, California, and in both pictures he was sporting his new Jesus ink. The seventeen-year-old pop star was raised in a religious household in Canada and once said in an interview, “I’m a Christian, I believe in God, I believe that Jesus died on the cross for my sins.” Beiber continued, “I believe that I have a relationship and I’m able to talk to him and really, he’s the reason I’m here, so I definitely have to remember that.”

This isn’t the first of Justin Bieber’s tattoos that depicts a religious theme. Last April, Bieber and his dad, Jeremy, got matching ribcage Hebrew tattoos that read “Yeshua,” which means “Jesus” in Hebrew. The Bieber men got these tats inked on their bodies while in Israel for Bieber’s “My World” tour. Although Bieber was primarily raised by his mother, who is a devout Christian, Bieber says that he recites prayers in both English and Hebrew before performing on stage. Bieber has several other body tattoos which he has collected over the past couple of years. Bieber’s first tattoo was designed after the seagull from the novel “Jonathan Livingston Seagull,” which Bieber says everyone in his family owns. Bieber also recently had an outline of a star inked on his left elbow, which cropped up in pictures of Justin Bieber visiting girlfriend Selena Gomez’s family in Texas last May. 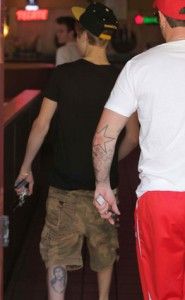 Pictures of Justin Bieber’s new Jesus tattoo show a shirtless Bieber walking on the Beach in Venice, sporting the large Jesus image on his left calf. A few days later, pictures of Bieber joining his dad for lunch at Shakey’s pizza parlor showed the pop star rocking his Jesus tat with pride, accompanied by a matching silver Jesus pendant around his neck. Beiber has always been open about his deep faith and Christian beliefs, and clearly has no problem proving their permanence in his life.

Take one look at Justin Bieber’s father and there’s no doubt that Justin Bieber’s love for tattoos was inspired by dear old dad. Jeremy Bieber has several tattoos inked on his body, ranging from two half-sleeves, to words written in script on his chest, and four letters inked above his belly button. Bieber’s dad can also be seen sporting a gold cross on a chain around his neck in beach photos with his son, which illustrates Jeremy’s religious beliefs as well. Although Bieber’s dad wasn’t around for most of his childhood, there is significant evidence suggesting that the two have since made amends, including their shared love of religious tattoos.

More Religious Tattoos for Justin Bieber in the Future?

At the rate Justin Bieber is going, it’s not hard to imagine him getting several more body tattoos in the near future. He is only seventeen right now and has already had several tattoos inked on his body in the past year alone. Since girlfriend Selena Gomez has no tattoos of her own (although she inked a fake “Justin” tattoo on her wrist for a recent performance), we wonder what she thinks of all Justin Bieber’s tattoos?