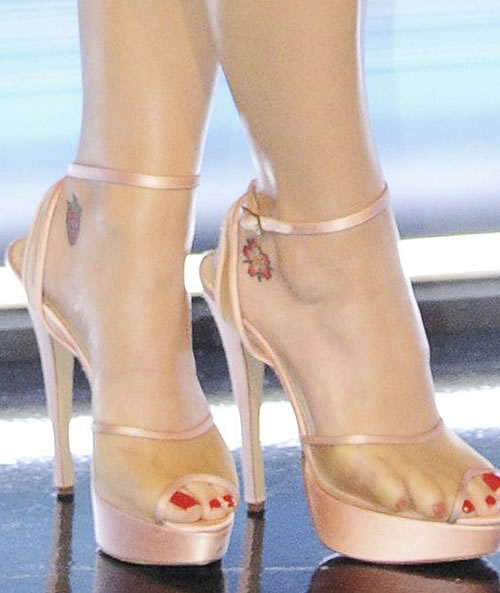 Shortly after announcing her intentions to go under the needle for a tattoo tribute to her Prism album and upcoming world tour, Katy Perry showed off a cute cherry blossom tattoo on the outside of her right ankle in November 2013. Katy Perry’s tattoo features a small cherry blossom flower inked in pink, and presumably represents her fourth studio album, which features Katy surrounded by flowers on the cover. Cherry blossoms are a popular tattoo design these days, and are often inked as a symbol of beauty, love and the transience of life, which is appropriate, considering Katy Perry seemingly got her matching cherry blossom tat with then-boyfriend John Mayer. And since Katy announced in late 2013 that she planned to take celebrity tattoo artist Keith “Bang Bang” McCurdy on tour with her, we’re guessing that the pop star’s cherry blossom ankle tat was inked by Bang Bang.

Katy Perry obviously has a lot of fun on tour, and the pop star has shown her affinity for fun little tattoos that remind her of her musical successes. During Katy Perry’s Hello Katy tour in support of her One of the Boys album, the singer used inflatable strawberries as props onstage, which led her to add a smiling strawberry tattoo to the inside of her left ankle in July 2009. For the cover of her next album, Teenage Dream, Katy posed on a cloud of pink cotton candy with the album title written in peppermint red and white stripes. In November 2011, Katy Perry debuted a tattoo on the inside of her right ankle featuring a cute little peppermint with a smiley face, which was obviously a tribute to her Teenage Dream album and candy-themed California Dreams tour. In fact, Katy Perry’s tattoo of the peppermint on her ankle was inked backstage during the tour, by none other than Bang Bang.

Katy Perry’s fourth studio album (third, not counting the gospel album she released in 2001), titled Prism, was released in October 2013, and included the number-one singles “Dark Horse” and “Roar,” which became huge hits in the U.S. Katy obviously had a vision in mind for this album, telling Billboard prior to the album’s release, “I know exactly the record I want to make next. I know the artwork, the coloring and the tone. I even know what type of tour I’m doing next. I’ll be very pleased if the vision I have in my head becomes a reality.” After announcing in June 2012 that she planned to incorporate “darker elements” into her Prism album, she revealed during the 2013 MTV Video Music Awards that she had changed the album’s direction after some self-reflection, saying, “I feel very prismatic,” which became the inspiration for the album’s title.

In addition to recording songs for Prism in 2013, Katy also co-wrote and recorded a song called “Who You Love,” with then-boyfriend John Mayer for his album Paradise Valley, and the song was released in August 2013, just before Katy revealed her cherry blossom tattoo. Unfortunately, John Mayer sports an identical cherry blossom tattoo on his right wrist, which he presumably got with Katy Perry before the couple split up in March 2014, amid rumors that John was cheating with his spin instructor. After getting matching Sanskrit arm tattoos with then-fiancé Russell Brand in June 2010, just two years before the couple filed for divorce, it’s a shame that Katy now has a cherry blossom tattoo that reminds her not only of her Prism album, but of her ex, John Mayer, as well.