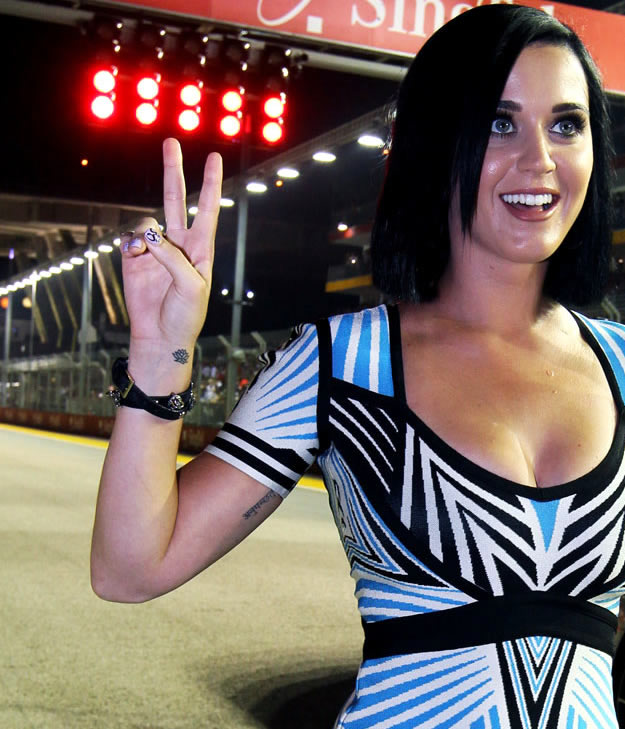 Keeping things symmetrical, Katy Perry inked a tattoo on her right wrist in January 2012 to balance out the “Jesus” tat on her left. The normally outspoken pop star hasn’t said anything in public about the lotus flower tattoo that she revealed in the midst of her divorce proceedings, but we have a feeling we know its meaning. The lotus flower is a tiny, discreet tat outlined in black on the inside of Katy’s right wrist, just below her thumb, and is noticeably more low-key than her other tattoos – particularly her whimsical grinning strawberry and peppermint ankle tats. Despite its small size, fans can see Katy Perry’s lotus flower tattoo whenever she performs, since she holds the microphone with her right hand. However, since the flower is inked so far to the side of her wrist, one gets the distinct impression that the ink is meant for Katy and Katy alone.

Katy Perry is pretty proud of her tattoos – especially the cartoon strawberry and peppermint on her ankles – and she has been consistent in the past about immediately posting pics of her new ink online for all to see. Katy has taken to Twitter either before or after getting many of her previous tattoos, giving followers the first glimpse of her new ink. This wasn’t the case with her lotus wrist tattoo though, which gives us the impression that the meaning of Katy’s lotus tattoo is more private and sober. With only 14 months of marriage behind her and a divorce from Russell Brand in her future, Katy Perry discreetly got the lotus tattoo meaning “new beginnings” inked on her wrist in January 2012. Katy’s tattoo meaning is fitting, considering the pop star was splitting from her husband at the time, and a new beginning is exactly what she needed. 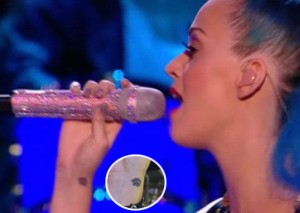 Katy was understandably distraught following her divorce from Russell Brand, and she even told TV host Jay Leno that she felt like she was going to die during the split. In keeping with the meaning of her lotus tattoo though, Katy Perry isn’t planning on moping around on what would be her second wedding anniversary: October 23, 2012. Instead, she is planning on throwing a small “divorce party” at her house to celebrate her new beginning in life with her closest friends. The lotus flower has a strong symbolic tie to many Asian religions, especially throughout India – a place that played an important role in Katy and Russell’s relationship – and it also has a strong symbolic tie to Katy’s life. The flower starts out its life in the mud at the bottom of a pond, slowly growing up towards the light at the water’s surface. Once it reaches the surface, the lotus flower blossoms and turns into a beautiful flower, making it an important Hindu and Buddhist symbol of new beginnings and spiritual awakening.