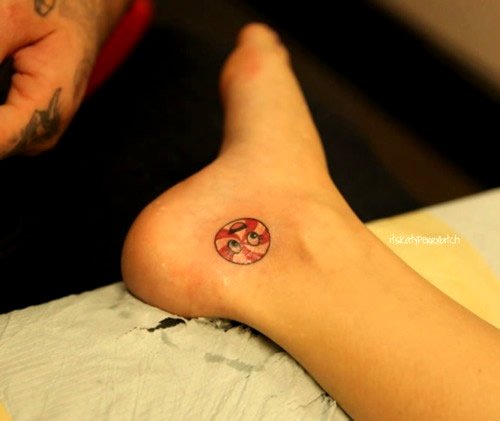 In November 2011, Katy Perry got another whimsical tattoo on her right ankle to match the cartoon strawberry that found a home on her left ankle back in 2009. The more recent ankle tattoo features a red-and-white-swirled cartoon peppermint wearing a big grin, which you would think would be a pretty unique tattoo design, right? It might shock you then to find out that there are at least 51 other people who share Katy Perry’s ankle tattoo. No joke. Katy got her peppermint ankle tattoo backstage at the Staples Center in Los Angeles after completing a set for her California Dreams Tour over Thanksgiving 2011. The pop star considered the peppermint tattoo for a while before actually getting it done, preceding the new ink with the following tweet: “I’m getting MY tattoo TOMORROW! #tourtat.” We’re just happy that Katy opted for the sweet peppermint ankle tat instead of a huge back tattoo of Freddie Mercury’s face, which she apparently came very close to getting. Now THAT was a close call.

If Katy Perry’s smiling strawberry tat represents her One of the Boys album, the equally happy peppermint tattoo on her right ankle is very much a tribute to her candy-themed Teenage Dream album and California Dreams Tour. Katy’s third studio album was released in August 2010, and the album cover shows the pop star lying naked on cotton candy clouds with the words “Teenage Dream” written in a red and white peppermint candy style. Judging by her stage props, outfits, album covers and tattoos, Katy Perry loves all things fruit, cotton candy and peppermint. The pop star even has a few candy-inspired peppermint stage costumes, and there are even photos of Katy wearing her spinning peppermint dress while getting her ankle tat done.

51 Other People Have the Same Peppermint Tat

In what must have been a mass show of support for Katy’s Teenage Dream album – or else a week’s worth of drunken antics and blacked-out debauchery – 50 members of her tour team got matching grinning peppermint tattoos inked on their bodies during the pop star’s California Dreams Tour. Apparently, tattoo artist to the stars, Keith “Bang Bang” McCurdy of NYC’s East Side Ink, traveled with the tour for one week, inking all the peppermint tats along the way. And that’s not all. Katy then decided to return the favor, taking control of the gun herself and giving Bang Bang his very own peppermint tattoo on his leg. Brave man. 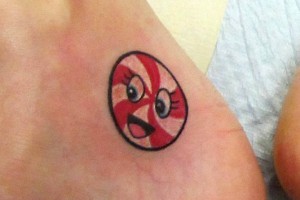 Although then-husband Russell Brand opted out of the peppermint tattoo party, he did get a new tattoo at the same time as Katy – the logo of his favorite soccer team, English club West Ham United. And peppermint wasn’t totally left out of the equation. The soccer badge is actually inked over top of a candy-cane swirl background, which Russell said at the time defined Katy’s “aesthetic ideology.” He also commented, “I thought the only way I can make this thing not be the act of a sissy is carve a football hooligan thing into my flesh so that’s what I’ve done.” Russell seems to be a fan of tattoos himself, but he claimed at the time that it was Katy’s idea to get the new ink. “It was her idea. It’s always her idea, she’s always scribbling permanent things on my body for a laugh and I’m always allowing it to happen!” Could that mean yet another tattoo removal for Russell Brand in the future?