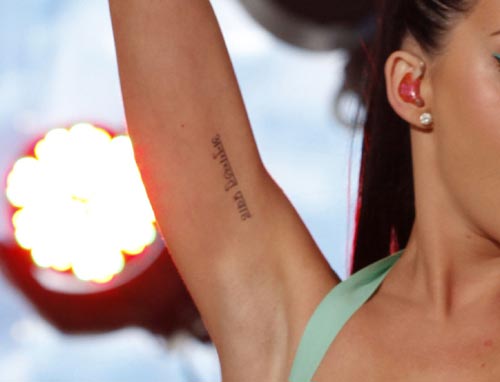 Katy Perry has a tattoo on the inside of her right bicep reading “Anuugacchati Pravaha,” which means “Go with the flow” in Sanskrit, the ancient language of India. When Katy Perry got the matching arm tattoo in June 2010 with then-fianceé Russell Brand, she probably had no idea what a painful reminder the Sanskrit words would be less than two years later, when the couple filed for divorce. While Katy Perry’s Sanskrit tattoo was spotted during a performance shortly after getting it inked, Russell showed off his arm tattoo in a shirtless photo gracing the cover of Rolling Stone magazine that same month. As VH1 so eloquently put it, “Proving their love for each other and for all things India once again, Katy Perry and Russell Brand got matching Sanskrit tattoos. They’re hardly the first pair in Hollywood to commit themselves to ink, but we have a feeling that their tats will be less regrettable than [others].” They sure missed the mark on that one.

Although Sanskrit tattoos are kind of a popular trend right now for celebrities like Rihanna and David Beckham, the language and its country of origin actually did have a special significance for Katy Perry and Russell Brand. Russell proposed to Katy in December 2009 while the couple was vacationing in Jaipur, India, and they were married in a Hindu ceremony in India on October 23 2010. “Go with the flow” seemed like an appropriate mantra for the unique, funny, and sometimes wacky couple, who apeared to be the perfect match. Again, VH1 said it best: “[The phrase] seems apt for these two – you wanna wear a dress made of neon rubber? Go with the flow. Wanna bare your chest on the Today Show? Go with the flow.” Unfortunately, Katy and Russell’s marriage “flow” lasted for only 14 months; the celebrity couple filed for divorce in January 2012, and the split was finalized in February. 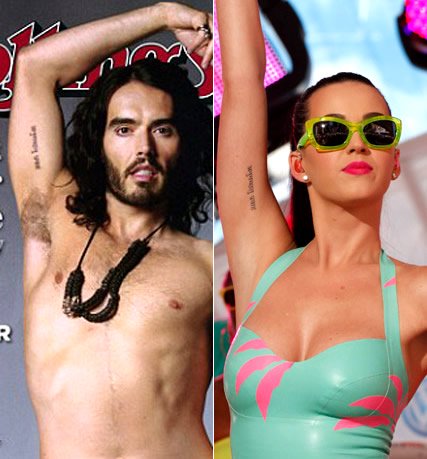 Russell Brand and Katy Perry got their matching Sanskrit tats in almost the exact same place on their biceps; the only difference is, Katy’s is still there. In the wee hours of March 24, 2012, about a month after his divorce with Katy was finalized, Russell was spotted at the Shamrock Tattoo parlor in Hollywood, where he got the “Go with the flow” tattoo removed from his arm. Even worse than literally erasing his last connection with Katy, Russell had his stunning new girlfriend, model Nikolett Barabas, in tow when he got the arm tat removed. Double ouch. What would have been the two-year anniversary of Katy and Russell’s wedding falls on October 23, 2012, and the pop star is apparently planning on throwing herself a “divorce party” to lighten the mood on an otherwise pretty depressing day. Maybe she’ll celebrate with a new tattoo!

Katy Perry and “The One That Got Away” 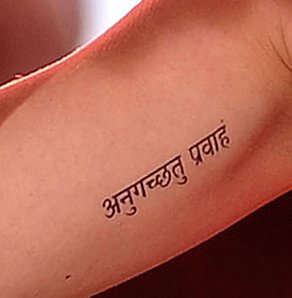 Katy Perry may have missed her calling as a psychic, because she basically predicted a few important events in her life months before they actually occurred. (Or else her marriage with Russell Brand was already circling the drain when the pop star was recording her Teenage Dream album, and she simply read the signs.) In October 2011, Katy released the song “The One That Got Away,” a pop ballad about lost love, in which she sings, “And on my 18th birthday / We got matching tattoos,” and then “Someone said you had your tattoo removed / Saw you downtown singing the Blues / It’s time to face the music / I’m no longer your muse.” Four months later, the couple was officially divorced, and five months later, Russell Brand actually did have his Sanskrit arm tattoo removed.