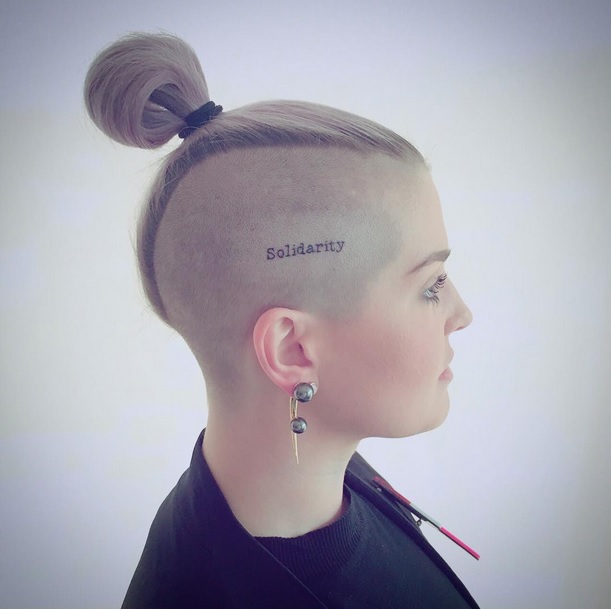 Never one to shy away from painful tattoos, Kelly Osbourne debuted her second head tattoo this week, the word “solidarity” inked on the right side of her head as a tribute to the victims of the tragic shooting in Orlando, Florida that killed 49 men and women and injured dozens more. The shooting, which took place at the popular gay club Pulse in the early hours of the morning last Sunday, was carried out by a lone gunman, who opened fire on revelers as they celebrated Latin Night at the club. The deadliest act of violence against LGBT people in the history of the United States, the Pulse shooting has led to an outpouring of support for the victims and their families from celebrities and others from around the world.

As others used social media to voice their grief and disbelief in the wake of the Orlando shooting, Kelly Osbourne took to Instagram to reveal her new “solidarity” head tattoo on June 14, captioning the photo:

“Noun. Unity of feeling of individuals with a common interest or purpose.” Individually, we have rights and unique gifts. Together, we have strength and powerful harmony. I have wanted to get this tattoo for a long time. The tragedy in Orlando devastated me and reminded me that every moment of our lives is precious. Every human is precious. Love hard. Live gracefully, authentically and with conviction, respect, purpose and compassion. Together we achieve what is impossible to those who stand alone. Those of us who embrace and respect freedom stand together, progress together, celebrate together and grieve together. You are not alone.

With her new “solidarity” head tattoo, Kelly Osbourne joins a handful of other celebrities who have paid tribute to the victims of the Orlando shooting over the past week, including Beyoncé, Adele and Florence + the Machines, who dedicated in-concert tributes to the victims of the shooting. Others, like Panic! at the Disco, have invited concert-goers to donate blood to help survivors of the tragic attack. Believe it or not, this isn’t the first tattoo Kelly has inked on the side of her head. Back in 2014, the 31-year-old debuted a piece on the left side of her head that reads “Stories…” as a nod to her fashion line.