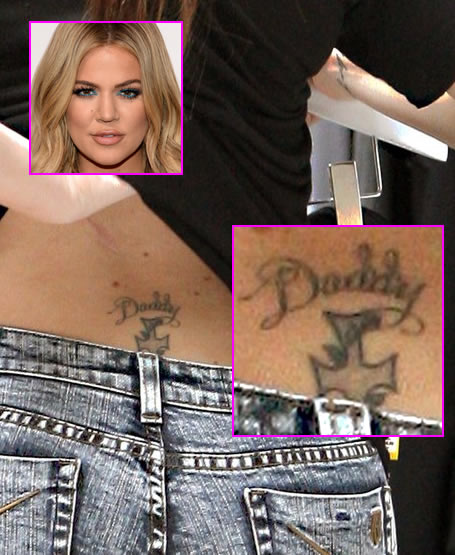 Of all the tattoos for Khloe Kardashian to get lasered off, you’d think it would be the tribute to ex-husband Lamar Odom on her hand that the reality TV star (finally) decided to remove. But no, Khloe has reportedly been undergoing laser removal treatments to get rid of the “tramp stamp” tattoo she got in honor of her late father, Robert Kardashian, nearly 15 years ago. And the process has apparently been “soooo painful,” the 31-year-old is advising fans against getting inked at all.

Khloe Kardashian got her “tramp stamp” tattoo when she was just 16 years old, three years before her father passed away, and the ink features a cross with angel wings and the word “Daddy” written above it. During an appearance on Kris Kardashian’s short-lived talk show back in July 2013, Khloe talked about getting the tattoo done, saying, “Nicole Richie and I had these matching tramp stamps done when we were, like, 16, and mom was having a 40-something midlife crisis so Nicole took her to get the same one done!”

It was back in 2009 that Khloe admitted to Ryan Seacrest that she didn’t like the placing of her “Daddy” tattoo, saying, “It’s on my lower back, I don’t like the location…I got a trendy location. It’s called a ‘tramp stamp.’” More recently, Khloe opened up about her decision to remove her lower-back tattoo, posting on Instagram this message: “The end of an era…Got this bad boy when I was 16…Not so cute anymore.” She also wrote, “I should’ve listened to Kim when she told me, ‘you don’t put a bumper sticker on a Bentley.’” At the same time, the star shared a video of one of her tattoo removal sessions.

News of Khloe Kardashian’s tattoo removal comes just weeks after the star’s younger half-sister, Kylie Jenner, went under the needle for her first-ever tattoo – a tiny red heart outline inked on the back of her arm, and around the same time that her other younger half-sister, Kendall Jenner, got tattoos number one and two. According to Khloe, she has two or three more sessions to go before her lower-back tattoo is completely erased. Now the only question is, when will Khloe Kardashian remove her Lamar Odom tattoo??