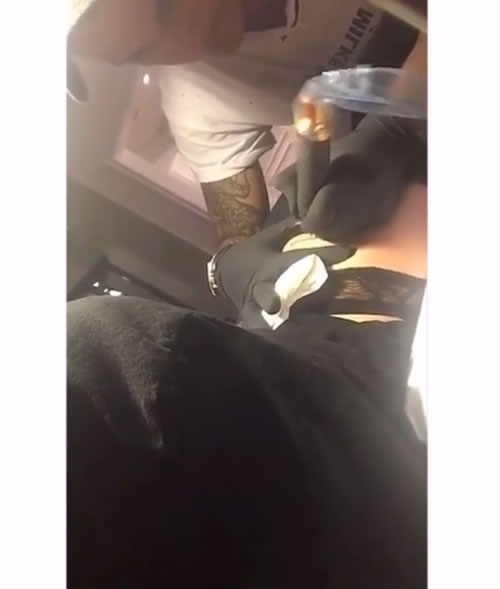 Kylie Jenner teased a Snapchat video of herself getting a new tattoo on her butt over the weekend, and had everyone in a frenzy trying to figure out what the model added to her rapidly growing collection of ink. According to TMZ, rather than getting a brand-new piece, Kylie simply revamped one of her older tattoos, adding the word “before” in front of the red “sanity” tattoo she had inked on her right hip back in November 2015. Kylie Jenner’s tattoo was done by celebrity tattoo artist Rafael Valdez, who has done plenty of work for the model’s on-again, off-again boyfriend, Tyga.

Late last year, Kylie Jenner visited Keith “Bang Bang” McCurdy’s tattoo shop in New York City, and had the tattoo artist add some new ink to her right hip. It took a while for the model to come forward with the actual design of the hip tattoo, but she finally revealed that it was a red tattoo of the phonetic spelling of the word “sanity,” stylized as \’sa-nƏ-tè\ The fact that she may have added to word “before” to her hip tattoo, so the full piece reads “before sanity,” has some people questioning the new meaning of the ink. What does “before sanity” even mean? Crazy?

A Snapchat video posted to Kylie’s account on July 24 shows what appears to be Kylie laying on her stomach in a black lacy thong, while Rafael Valdez adds some fresh ink to her butt/hip area. This latest piece marks tattoo number five for Kylie Jenner, who also has a red squiggly “M” inked on her finger and her grandmother’s name, “Mary Jo,” inked on her bicep in her grandfather’s handwriting. Kylie’s very first tattoo, a tiny red heart on the back of her arm, was also done by Rafael Valdez, and while the 18-year-old has hit up NYC-based tattoo artists JonBoy and Bang Bang for some of her more recent ink, she is obviously a fan of Valdez’s work, and called on him again for this latest tat.

Long story, short, Kylie Jenner’s new tattoo remains a bit of a mystery. If you ask us, the Snapchat video definitely makes it look like Kylie’s fifth tattoo is being added to her left butt cheek, while the older “sanity” tattoo is inked on her right hip. Either way, while Kylie has yet to reveal the design of her latest tattoo, we do know that the piece, however tiny, definitely didn’t come cheap. According to Valdez’s website, he charges $200 per hour, with a $600 minimum. What do you all think Kylie had Valdez ink on her body? Let us know your predictions in the comments section below!!